RAW Semantics on 'The Tyranny of Words' 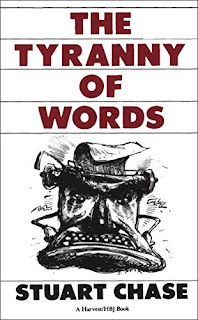 At RAW Semantics, Brian Dean posts about The Tyranny of Words, by Stuart Chase, which he explains was the first popularization of Alfred Korzybski's Science and Sanity.

Chase influenced figures such as Robert Heinlein, Dean explains. He writes, "I ordered a copy of The Tyranny of Words from the UK’s lending library system, years ago, and it impressed me enough that I scanned large sections of it and converted to text with OCR software."

The post includes large quotations from Chase, allowing the reader to find out about his views.

If this topic interests you, see also Michael Johnson's post "Why Korzybski Waned: Some Educated Guesses" at Overweening Generalist, which discusses a number of other popularizers of Korzybski.

I miss the Overweening Generalist blog.

I do too, Eric. It was often very good. If it ever resumes, I will give it a signal boost here.

Me three... I would help promote it on my end too.

On Chase's book - not very faithful to Korzybski's project and one of the weaker "popularizations." Better: Kodish's Drying Yourself Sane, Weinberg's Levels of Knowing and Existence, Lee's Language Habits or Wendell Johnson's People in Quandaries.

Korzybski can be hard to crack - as an introduction, try the General Semantics Seminar 1937 Olivet College Lectures. Easy to read. And probably the best introduction to his thinking, even better than the books I mention above.