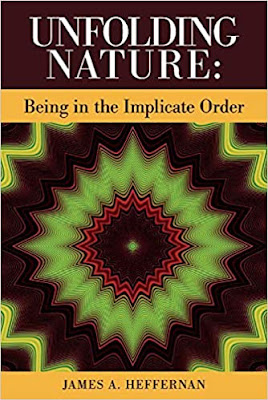 [A book announcement from James Heffernan, which he's been posting to the RAW groups on Facebook. I earlier did a posting on Heffernan's book on the Eight Circuits model, Nonlocal Nature: The Eight Circuits of Consciousness. -- The Management.]

I am a longtime follower of and contributor to this group, and so wanted to let you all know that I have just released a book called Unfolding Nature: Being in the Implicate Order, based on the ideas of David Bohm, who of course is featured prominently in many of RAW's books. Take a look if you're interested! Here is a brief excerpt:

I think in time we will find that reductionism doesn't make any sense.  The particles we reduce to are themselves abstracted from the unified  background. To say that these abstracted entities called atoms are  themselves the fundamental causal agents of reality is circular, you  see. And this is precisely the circle we find ourselves in when we try  to say, as almost everyone does, that atoms are the fundamental causal  agents of all of infinity. After thousands of years of scientific  development, and the quantum revolution in the twentieth century, we  have been able to infer, and then much later “photograph,” individual  atoms.

But then, if atoms are the reason everything happens,  where do the fundamental forces come from? These forces are responsible  for how the atoms behave, but they are not “in” the atoms, are they? And  without these forces, the whole notion of an atom would be entirely  meaningless. So we have these mysterious forces which we just have to  throw up our hands and say are a “given.” We also know that atoms are  constantly shifting from matter to energy and back again. And then there  are nonlocal phenomena, which seem to transcend space and time  completely – the dimension in which our atoms exist.

So we can  see that to suppose atoms are the whole story rather falls apart when we  consider how complex the situation is. And this is to say nothing of  the fact that it goes much deeper than just the atom. We have subatomic  particles, of which there are several hundred! And of course when we  posit phenomena like the quantum potential and the implicate order,  atoms are rather put in their place. So this ultimate reduction to atoms  seems to have some very serious problems indeed. And of course, it is a  primary theme of this book that there are very good reasons for this.