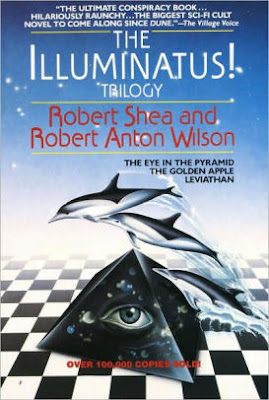 A TV and movie production company with an excellent track record has announced plans to produce a TV series of Illuminatus!

Of course, you never know about this sort of announcement, but what makes this big news is Hivemind has completed many projects including The Expanse, a Hugo Award winning science fiction series. The Illuminatus! series is a collaboration between Hivemind and Kallisti, a suggestively-named company associated with amoeba.

Rasa reports Kallisti had been secretly working on the project for some time. The RAW Trust got the first inquiry from Hunter Gorinson of Hivemind just over a year ago.

"That seemed like perfect timing as Kallisti was just nearing that point in their development where they could use Hunter’s expertise. The Expanse from Hivemind is one of my favorite sci-fi dramas in recent years. I immediately gave Christina my thumbs up on that connection," Rasa said.

"RAW saw several unsuccessful attempts to get Illuminatus! to the screen. This latest effort seems like it has genuine traction!" Rasa said.

Hivemind & Brian Taylor Conspire to Bring THE ILLUMINATUS! TRILOGY to Television
Subversive and Influential Sci-Fi Franchise Coming to TV from Showrunner of HAPPY! and Producers of Sony’s BLOODSHOT and Netflix’s THE WITCHER

LOS ANGELES, CA–  December 11, 2019 – Hivemind today announced that it has partnered with writer/director Brian Taylor (HAPPY!, CRANK) and European production company Kallisti for a new television series based on THE ILLUMINATUS! TRILOGY – the hugely influential science-fiction franchise created by authors Robert Anton Wilson & Robert Shea that first introduced the concept of "the Illuminati" into the popular consciousness, while simultaneously fueling, deconstructing, and skewering America's modern-day obsession with conspiracy theories.

When the offices of a Manhattan news publisher are bombed, anti-authority reporter George Dorn begins to suspect that the disturbing conspiracy his editor has spent months investigating is not only real, it might be the key to unlocking all of history’s greatest unanswered mysteries. As George sets out to find his mentor and uncover the truth about an all-seeing secret society that seems to unify every insane, inane, and outlandish conspiracy theory ever told – from the JFK assassination, celebrity cabals and lost continents to UFOs, ancient gods and the truth about the New World Order – he finds himself drawn deeper into a war between two shadowy groups. On one side stand the Discordians, a clandestine band of chaos-loving guerrilla fighters led by the enigmatic modern-day pirate Hagbard Celine; and on the other, the Illuminati – elite authoritarians who secretly manipulate world events, ever expanding their wealth, influence, and physical power in a plot to escape the limitations of human existence.

ILLUMINATUS! will be executive produced by Dinesh Shamdasani and Hunter Gorinson for Hivemind, and Iris McPherson and Kirstin Winkler for Kallisti. Taylor will serve as executive producer and showrunner.

“ILLUMINATUS! is a kind of mind-blowing literary miracle…  It manages to be completely seminal while as relevant today – if not more so – than the day it was published,” said Taylor. “Wilson and Shea have created a fractal-like world of conspiracy inside conspiracy that completely anticipates today’s internet-fueled, Post-Truth culture.”

A globetrotting science-fiction/conspiracy thriller laced with subversive humor, ILLUMINATUS! was first published in 1975 at the height of post-Watergate paranoia and has remained in print ever since.  Often ranked alongside Frank Herbert's DUNE, Douglas Adams' HITCHHIKERS’ GUIDE TO THE GALAXY, and William Gibson's NEUROMANCER as one of the most influential and obsessively followed pieces of cult science fiction ever produced, references and allusions to the series have turned up everywhere from John Carpenter's THEY LIVE to ABC's LOST with high-profile creators such as Philip K. Dick, Alan Moore, George Carlin, Damon Lindelof, Grant Morrison, and more citing the series as an inspiration and influence.

Celebrated as a “mind-twisting science fiction…classic for more than 30 years” by the New York Times, “the ultimate conspiracy book” by the Village Voice, and the “New Testament” of the American counterculture underground by Vice, ILLUMINATUS! has spawned nearly a dozen sequels and spin-offs, along with comic books, stage plays, radio productions, role-playing games, and more based on the original trilogy. In recent years, Kallisti has also developed an immersive ILLUMINATUS! VR experience, exploring series’ many iconic characters and settings, that has exhibited at numerous arts and technology events in the United States and Europe.

“Since acquiring the rights to this wild and unique series, we have been working on an immersive experience around THE ILLUMINATUS! TRILOGY and are thrilled to bring this beloved story to television. We couldn’t think of more ideal partners than Brian Taylor and Hivemind. The themes of this cult classic are more current than ever today, and we cannot wait to bring it to life,” said Kallisti partners Iris McPherson and Kirstin Winkler.

"The series' staggering influence has only continued to grow with each passing year not just because it explores and indulges the most compelling depths of America's conspiratorial imagination, but because it also gives us the tools and knowledge to understand it. If there was ever a series primed for 21st century television, it's ILLUMINATUS!” said Hunter Gorinson, Hivemind’s VP of Brand & Content Strategy.

ILLUMINATUS! will mark Taylor’s next television project following HAPPY!, based on the Image Comics series and starring Christopher Meloni and Patton Oswalt, alongside left-field guest appearances by Jeff Goldblum, Ann-Margret, and musicians “Weird” Al Yankovic and Amanda Palmer. The series recently concluded its acclaimed run on Syfy with an 88% Rotten Tomatoes score for its final season. Taylor and Grant Morrison’s reimagining of Aldous Huxley’s BRAVE NEW WORLD is currently shooting for USA Network in London.

Kallisti is an independent creative content studio that specializes in traditional, interactive and immersive storytelling. Since acquiring the film, television and interactive rights to THE ILLUMINATUS! TRILOGY, Kallisti has been working on an interactive VR experience with creative direction from UK design studio amoeba. A demo VR experience based on these seminal works received rave reviews at the Rotterdam Film Festival’s Cinemart and at New Orleans Game Fete. Kallisti partners Iris McPherson, whose UK film-marketing company Filmtiki was involved in the marketing campaigns of tentpole movies such as THE AMAZING SPIDER-MAN, BATTLE LA and ANONYMOUS and Kirstin Winkler, an LA-based producer and former EVP of Centropolis Entertainment (10,000 BC, 2012, ANONYMOUS) will be overseeing the creative process for the studio.

Greyface will not be listed in the credits of this mass culture product. This is funded by the Order of the Garter to try to maintain their "divine" power to the end of next year.

Before they published this: https://bbc.com/ideas/videos/what-is-the-fascination-with-the-illuminati-conspi/p07q0jd2

I don't trust it either. But as someone who has at least read it, I will watch it, but make sure to keep my wits about it. A company releasing a television work of important material from a dead author in order to twist it and push their own agenda literally seems like a bit from the books themselves hehe

Hopefully they capture the atmosphere and tone at least. I fully expect the messaging and content to be bastardized a bit though

Initially, the graphic novel "V for Vendetta" was a cult artwork that had a strong influence on many people and gave rise to their interest in anarchism. Alan Moore, the author of this work criticized the Hollywood production for distorting the meaning, for excluding the topic of anarchism and even refused to list his name in the credits. As a result, the feature film became a brand of the youth subculture of Anonymous, which serving ddos attacks of government coordinators and which funding the production of plastic guyfox-merchandise.

Not long ago, the BBC released a video titled "What is the fascination with the Illuminati conspiracy?", which briefly mentioned the Order of the Bavarian Illuminati and most of the video said that the modern Illuminati was an invention of Discordian jokers, promoted by the trilogy "Illuminati!".

And after that, 30 days ago, the news appears that the production company that released some entertaining TV-series in collaboration with a Hollywood director announced the adaptation of the trilogy "The Illuminatus!" by Robert Anton Wilson and Robert Shea.

And they seem to be in a hurry to show this adaptation to masses before the immanentize the eschaton, for turn a golden apple into a gilded plastic merchandise, just as the "V for Vendetta" was reformatted. I have already met attempts to discredit the name and legacy of Robert Anton Wilson in social networks. Unfortunately, the original authors of "Illuminatius!" will not be able to declare their wish to exclude the mention of their name from the titles of Hollywood adaptation.

Therefore, in the exercise of our apostolic authorization, we, the Apostles of Eris, openly declare the open secret conspiracy and invite for complicity:

For the sake of preserving the cult status and the original meaning of the trilogy "Illuminatus!", so that it is not desecrated by Greyface, through Hollywood adaptation and plastic merchandise - all this will please the Goddess: sabotage, diversion, provocation, property damage and other deliberate malicious acts in relation to the process of creating this product of mass culture and relation to all participants of this well-paid TV adaptation. All this is openly declared goddessly, in case it is directed against the attempt of Hollywood's "Illuminatus!" adaptation. Take part in our most open and most secret conspiracy. Most secret is because none of the conspirators know who else is in this conspiracy. Most open because the purposes and victims of this conspiracy are well known. These will the central victims: