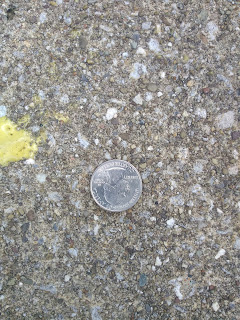 A quarter stuck to the sidewalk with a piece of gum by someone near my home in Berea, Ohio. So long as no one removes the coin from the "Prometheus Rising Sidewalk," I can easily complete one of the exercises early in the book. -- The Management.

[Yesterday's blog post announced plans for an exercise/discussion group for Prometheus Rising. Here is Eric Wagner, with a guest post on our plans.]

Prometheus Rising holds a unique place in Robert Anton Wilson’s output. He points back to it over and over again in his later books, essays, and introductions. Over and over again he said that if you want to make positive changes in your mind-body system, do the exercises in Prometheus Rising. I own the Hilaritas edition, but I do not have it at hand right now. On page 28 of the New Falcon Second Revised Edition, it says,

"Sad as it is to say, you never understand anything merely by reading a book about it. That’s why every science course includes laboratory experiments, and why every consciousness-liberation movement demands practice of yogas, meditations, confrontation techniques, etc. in which the ideas are tested in the laboratory of your own nervous system.

"The reader will absolutely not understand this book unless he or she does the exercises given at the end of each chapter."

Tom Jackson had the idea to host a “Do the Exercises” action and discussion group for Prometheus Rising at rawillumination.net facilitated by Tom, Gregory Arnott, and myself. We will begin on Crowleymas, October 12. The group will last for at least 23 months. In preparation I reread the opening pages up until the first exercise in chapter one. I finished reading that at 2:18 PM on August 31, 2020, and I began visualizing a quarter.

The first edition of Prometheus Rising came out in 1983, and I first saw it and immediately bought a copy in March 1985. I have spent a lot of time doing the exercises over the last 35 years. In the early 90’s Bob wrote a lot about E-Prime, and I learned to write, speak and think in E-Prime. In 1997 I decided to translate Prometheus Rising into E-Prime. Shortly after I started I ran across the Revised Second Edition at Borders. To my mind, Bob radically improved the book. He did not put it entirely into E-Prime, but he brought to bear on the text all he learned in the thirteen years since the book had first come out. I highly recommend you get either the Hilaritas edition (based on the Revised Second Edition) or the New Falcon Revised Second Edition.

I have, a few times, tried to practice Prometheus, but I kept breaking on the rocks of never finding that damned quarter when I was looking for it. What ended up happening instead it works the other way around now - if I find money on the ground (not just a quarter), I think of Prometheus Rising. I found one about a week ago at work, and now this group is posted.