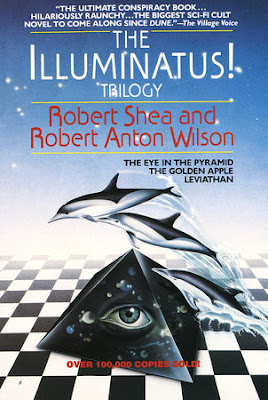 [I have mentioned before that the Prometheus Hall of Fame Award is the only literary award that Illuminatus! (that I know of) ever won; it won in 1986, in only the fourth year of the award, in a tie with Cyril Kornbluth's The Syndic, and Shea's acceptance speech is available on this website.  The award is given by a group called the Libertarian Futurist Society (disclosure: I'm a member of it.)

But what I did not know until the other day is that Shea, a member of the LFS, is the person who nominated the work for the award! Once he made the nomination, his vote was only one among the members, so Illuminatus! won fair and square. The nomination letter is below, and then I will append some notes. My thanks to Anders Monsen, a member of the board of the Libertarian Futurist Society, for his working making this and other documents from past issue of the LFS-- The Management.]

I feel somewhat sheepish about having nominated my own novel. I am not claiming that Illuminatus! is as good as the novels that have already been chosen for the Hall of Fame. There are at least two books on this year’s list of nominees that I would vote for before voting for Illuminatus! But I do believe it deserves to be nominated and considered. Eventually, I feel, there will come a year when all the more deserving books will have already been inducted into the Hall of Fame and Illuminatus! will have its turn.

That it has not been nominated by anybody else must be due, it seems to me, to one or more of these five reasons: 1) It was just an oversight; 2) Everybody was expecting someone else to do it; 3) The Advisory membership of the Libertarian Futurists is not a representative cross-section of libertarian/anarchist science fiction fans; 4) the Goddess Eris wants me to know how she felt when she wasn't invited to the party on Mount Olympus; 5) It ls the work of a Conspiracy.

While liberal Gimps might consider it bad form for an author to toot his own horn like this (one can imagine what Ellsworth Toohey would say). I am sure the individualists. egoists, objectivists, libertarians and anarchists who make up the L.F.S. will applaud it as an act of rational self-interest and healthy self-esteem.

Besides, if I need a more altruistic motive I can always say I'm doing it for Bob Wilson's sake.

[Notes: This letter appeared in Volume 4, Number 3 of the LFS newsletter, Summer 1986. The "novels already chosen for the Hall of Fame" Shea mentions are "The Moon is a Harsh Misstress," Robert Heinlein; "Atlas Shrugged," Ayn Rand; "Nineteen Eighty-Four," George Orwell; "Fahrenheit 451," Ray Bradbury; "Trader to the Stars," Poul Anderson, and "The Great Explosion," Eric Frank Russell. I don't know what else was nominated that year. For more on the LFS and its awards, see this website.]