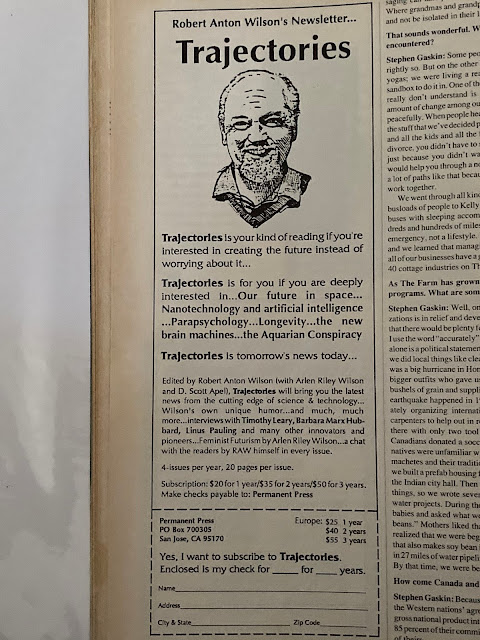 The clever "why you should subscribe" advertisements used to be one of my favorite parts of the old Boing Boing magazine (which came out in the late 1980s and early 1990s, before the well-known website).

It turns out that the ads for Robert Anton Wilson's "Trajectories" newsletter, put out by RAW and D. Scott Apel, were pretty interesting, too. Here is an ad from "Magical Blend," April 1991, posted on Twitter by Michael Clinton.  (Michael and Ken Condon are the folks behind the work featured at the Zendrites.com website; if that doesn't ring a bell, go look at it.) And of course, much of the material for Beyond Chaos and Beyond, edited by Apel and published in 2019, as well as RAW's Chaos and Beyond came from RAW's newsletter.

This would have been about the time I subscribed to Boing Boing, by the way. I never subscribed to "Trajectories" or even heard about it until years later; maybe they should have run an ad in Boing Boing. (Back issues of Boing Boing are available at the Internet Archive.)

Boing Boing was put out by Mark Frauenfelder and his wife, Carla Sinclair; I currently subscribe to Mark's new newsletter, The Magnet.