The 'lost' RAW book will be out soon 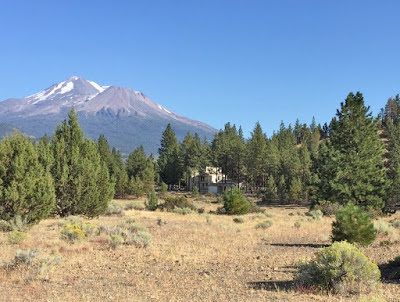 The view from Rasa's window as he toils on The Starseed Signals. That's Mount Shasta.


[When I spotted the news about the planned publication of The Starseed Signals: Link Between Worlds, l naturally wanted to know a lot more, so I contacted Rasa and he immediately agreed to take a few questions. While some details about the book apparently won't be revealed until it comes out, i.e. the identity of the writer who agreed to write an introduction, this may answer sombunall of what Robert Anton Wilson fans want to know. For example, it's clear Hilaritas Press is trying to get it out soon, maybe even the next few weeks.

There has been some discussion about the overlap between Cosmic Trigger and The Starseed Signals. On Twitter, Charles Faris, one of the very few people who has read Starseed, wrote, "Happy to say that I’ve read it and it’s freaking awesome. I am beyond excited that it’s going to be published. He goes through the same territory from a completely different perspective. It’s great."

Richard Rasa,  usually known only as Rasa, is listed at Linked In as "metaprogramming director at the Robert Anton Wilson Trust." While Wilson's daughter Christina Pearson is the trustee of the trust, Rasa handles much of the day to day work and serves as the editor at Hilaritas Press, the publishing imprint of the trust. For more on Rasa, see my 2016 interview . He is an artist and graphic designer, is a former rock musician, and currently leads the band Starseed.

Rasa lives in Weed, California, near the Oregon border. (The town is named after its founder, Abner Weed.) -- The Management.]

What can you tell me about "The Starseed Signals: Link Between Worlds"? Does it read like a completed, full-length book?

Rasa: The Starseed Signals: Link Between Worlds is a full completed book, about 360 pages. There are two interviews we hope to add to the end of the book, which will bring the page count to about 400 total. It is a completely finished work, and reads in RAW’s typical style. We think it was written in the latter half of 1974. I loved reading it, fully appreciating that this was a finished RAW title that few had read, and delighted to realize that it did not disappoint. I wondered about your next question, did RAW have a reason to not publish it, or did he just not find a publisher for it, and it fell by the wayside? That’s a mystery.

Is it known why the book was never published?

Rasa: Adam Gorightly surmises that RAW intended the book to be an aid in the defense of Timothy Leary, who at the time of the writing was in prison, a victim of persecution by the Nixon administration and the politics of the day. When Leary was released from prison, that need subsided. Readers of Cosmic Trigger know that Bob and Tim were onto similar Sirius investigations simultaneously, as described in Cosmic Trigger: Final Secret of the Illuminati. The Starseed Signals goes deeper into that topic, but also touches on a wide range of subjects that interested both Bob and Tim. It also contains RAW’s reporting on what was actually happening to Timothy Leary and his friends around the time of his incarceration. People curious about the controversies surrounding those days will be eager to read this take from RAW.

The book was given to an agent to try to sell to a publisher in 1975, but that never materialized. I suspect that RAW decided to rethink the whole project, maybe to take the focus off of the trials of Timothy Leary and present what was going on at that time more from his own personal perspective – and then that idea materialized in Cosmic Trigger. Just a guess. There is a little bit in The Starseed Signals that was edited and then made its way into Cosmic Trigger, but The Starseed Signals is an entirely different book.

How did it come to the attention of Hilaritas?

Rasa: Discordian Historian Adam Gorightly has previously described how he acquired the manuscript. Friend of Discordian founders Kerry Thornley and Greg Hill, Dr. Bob Newport rescued Hill’s archives from “death-by-dumpster,” as Adam poetically describes it, and some years later, Dr. Bob passed the archive onto Adam. Adam approached a publisher about the book, and the publisher contacted RAW’s daughter, Christina, Trustee of the RAW Trust, who agreed to work with that publisher. That was in 2010, and I suspect Eris had a hand in the publisher essentially dropping the ball for the next six years or so. In 2016, after the creation of Hilaritas Press, Christina finally got her first look at this unpublished RAW title. After taking a good look at what the publisher had created, and in comparing it to RAW’s original typewritten manuscript, we decided that Hilaritas Press could do a much better job at preparing the book for publication. It then took some years, and a fair amount of money paid to lawyers, for the RAW Trust to get out of that original contract with the publisher. Hilaritas Press reconstructed the book from RAW’s original typewritten manuscript, and actually uncovered some segments that the first publisher had simply left out, presumably because they were too hard to decipher. 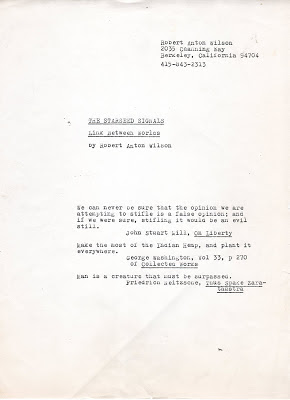 Will the publication resemble the recent reprints by Hilaritas, e.g. cover by Amoeba, extra material contributed by other writers?

Rasa: Yes, the cover is being designed now by Scott McPherson’s amoeba company. We sent Scott a copy of the book to read before he started his design work. That makes Scott only one in about half a dozen people who have ever read this book. There will be an introduction added to the book (being written now, in fact) – that writer to be announced. There will also be an editor’s note about the publication that will probably contain some of the paragraphs I’m writing for you here, along with more details.

What is the current publication schedule?

Rasa: I’m always hesitant to give dates because there are always last minute issues that can delay us for weeks at a time, but the best guess at the moment would be the beginning of July, maybe a month from now. I’m usually overly optimistic, but that doesn’t seem too wild a guess.

Oh, wow. This seems like a big deal. I remember coming across a lot of Starseed stuff in those Green Egg years and in a lot of his funky discordian mailers that he must has sent out in bunches. I never was able to fully wrap my head around what I came across and there always seemed like a bigger story that I was missing. I look forward to this.

Incredibly exciting update. Weeks, not months! I have a whole "thing" planned for a 7/23/20 celebration of the book. Thanks, Rasa and Christina (and all who have shared news about the publication). --Chad

P.S. Awesome view from Rasas window.
Shasta is a beautiful and special mountain and i think, it was my first 4000 m peak.
I also really like the name of the town... :)
D.M.S.