Online exhibit on the UMMO letters 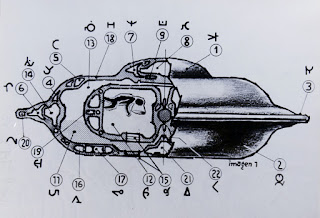 We are the Mutants, an interesting website last mentioned on this blog for its exploration of intelligent dolphins and Illuminatus!,  has an online exhibit up on the UMMO letters, an episode in UFO lore that was mentioned by Robert Anton Wilson.

Michael Grasso (who also wrote the dolphin pieces) explains, "The UMMO letters were a series of thousands of pages of typewritten correspondence sent over nearly two decades, ostensibly written by the natives of an alien planet, explaining their reasons for visiting Earth, the scientific principles behind their technology, and their own cultural and political beliefs. The letters, written in Spanish (and eventually French), were initially sent to those involved in the contactee movement in Spain. The Ummites’ symbol, a sigil roughly resembling the Cyrillic character Zhe or the early astronomical symbol for Uranus, was stamped at the bottom of many of the letters."

Although a guy named Jordán Peña confessed to writing the UMMO letters, Grasso writes, "Even these confessions of Peña’s have been cloaked in mystery and equivocation in the years since the 1990s, given the fact that the UMMO documents occasionally reference actual science known to very few at the time, including the aforementioned Sakharov theories as well as UMMO documents that seem to predict the discovery of dark matter and quantum computing well before they emerged in the mainstream."

Thank you to Jesse Walker for pointing me to this.