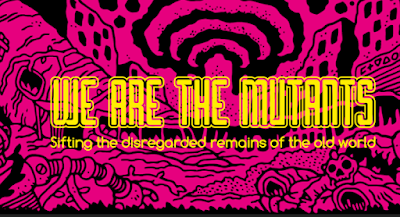 Part Two of "Days of the Dolphin: Cetaceans in Cold War Science and Science Fiction" by Michael Grasso has posted at the We Are the Mutants website, and there's quite a bit of discussion of Illuminatus! Sample:

Another, altogether more playful tale of conspiracy involving intelligent dolphins came in 1975 with the publication of the Illuminatus! trilogy by Robert Anton Wilson and Robert Shea. Illuminatus! could be considered a grab-bag of all the esoteric, political, and historical conspiracies that were bubbling up by the middle of the 1970s, and thus the inclusion of a super-intelligent dolphin named Howard, who’s able to communicate in English thanks to the invention of a seemingly mad, charismatic technological genius (Hagbard Celine), seems not too out of place. In fact, it’s the role that Howard the dolphin plays in the trilogy that’s really interesting. He and his dolphin allies are constantly portrayed as more advanced and evolved than the brutish apes on the surface, who are rushing to “immanentize the Eschaton.” Howard and Celine spar over their respective species’ cultural development. The authors put the provocative (and Lilly-ian) idea in the mouth of Howard that perhaps humans aren’t as advanced as they think they are ...

Part Three offers more about John Lilly and mentions Robert Anton Wilson again. Lilly had paranoid visions of being contacted by higher intelligence that were similar to those of Philip K. Dick and RAW.

BTW, here's part of the blurb for the We Are the Mutants website:

"We Are the Mutants is a weekly updated magazine focusing on the history and analysis of Cold War-era popular and outsider culture, with a strong emphasis on speculative (sci-fi, fantasy, horror), genre, pulp, cult, occult, subculture, and anti-establishment media. We cover everything from underground comics and post-apocalyptic fictions to ufology tropes and space disco."

This is what I was thinking while reading Lilly's "Man and Dolphin" and "The Mind of the Dolphin":

"The authors put the provocative (and Lilly-ian) idea in the mouth of Howard that perhaps humans aren’t as advanced as they think they are ... "

Shall we ever know?

"We do not yet fully understand the human mind." - John C. Lilly

I found a chapter on Lilly in 2016's _Groovy Science: Knowledge, Innovation and Counterculture_, co-edited by MIT's David Kaiser, he of _How The Hippies Saved Physics_:

Burnett argues Lilly's experiments with dolphins, LSD and the sensory deprivation tank took off from military-sponsored research in brainwashing and mind control. Apparently, in all this, Lilly went rogue, of course.

RAW admired Paul Watzlawick, who has a chapter on dolphin communication in _How Real Is Real?_ that I still find interesting (book published in 1976).

I recently found out Lilly's been a big influence on Grant Morrison. (Morrison's a huge fan of RAW too.)

In James Heffernan's _Nonlocal Nature_ (which you, Tom had a blog post about), he asserts that Lilly's "In the province of the mind" quote is "the final secret of the Illuminati." RAW's mentioned about 15 times in that book, which seems basically sold on David Bohm's interpretation of quantum mechanics.

Michael, do you recommend the book? I haven't read it yet.

There's a lot to like about _Nonlocal Nature_, but Heffernan seems far too sure of himself about the Bohm Model, which bothered me a bit.

Heffernan has provided a unique take on the Eight Circuit Model, though, and it made me think, so I will say yes, I recommend it. He's a unique thinker, a very well-read mystic who values the physical sciences highly.

His model is as much a departure from RAW/Leary as Antero Alli's was/is. Maybe more so.