Ted Hand on 'The Earth Will Shake' 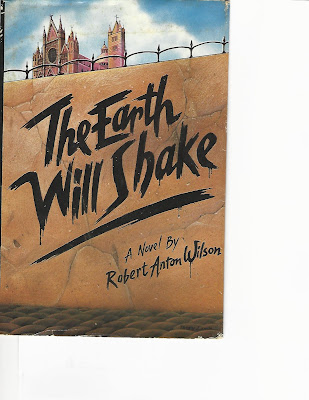 Cover art for Tarcher first edition of The Earth Will Shake, courtesy John Merritt. The cover artist is Terry Lamb.

Tom Jackson: Any chance you can give me a few words on why it's your favorite?

Ted Hand: I think it's his best realized novel in the classic sense, a bildungsroman that creates a believable character and development process but brilliantly and economically uses this to present a theory of freemasonic initiation. More readable than Eco, more real than Dan Brown.

Ted Hand: Always! I think it's significant that he was able to pull off such a successful "straight" novel, his other trilogies being so experimental and Widow's Son getting back into that territory.

Tom Jackson: "Masks of the Illuminati" also plays it relatively straight, and I like that one, too.

Ted Hand: Good point, Masks is pretty close to straight, just some stream of consciousness, and also a very successful modernist novel that presents a theory of magic without neglecting the business of unraveling a ripping yarn.

Interesting comments. "The Earth Will Shake" did not blow me away the first time I read it back in 1983. I found it too conventional. On rereading the book I started to discover its hidden depths, and now I love it.

I remember in a talk Bob said he used cut-ups in all of his novels. An audience member said, "Not in 'The Earth Will Shake'."