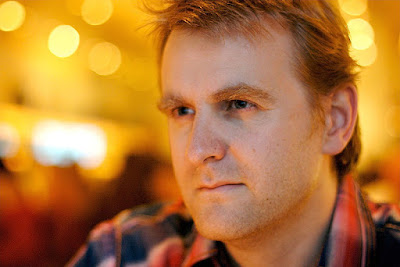 A crime has been committed in a big city, and an investigator is assigned to the case. At first it looks like a straightforward crime case, albeit one with political overtones, but soon the investigator is drawn into a weird, complex word and into the heart of a conspiracy.

I'm talking about Nick Harkaway's science fiction/mystery novel Gnomon, a rather ambitious and long literary work that many of you might well enjoy. Michael Dirda did a good job of describing the book in his review for the Washington Post. The first paragraph of Dirda's review reads,

I might have written about Harkaway's book, anyway, on the grounds that it's an ambitious SF novel that would interest sombunall of the blog's audience. But as I got farther in the book, I began to wonder if there were references to Illuminatus! and Robert Anton Wilson in it.

(1) One of the book's main characters (on page 415 of the American hardcover) talks about "walking through walls" to get out of prison and mentions Timothy Leary and Wilhelm Reich (the latter not by name, but the reference is pretty clear). (Forgot to mention in an earlier version of this post that the words "chapel perilous" appear on the next page.

(2) There are discussions of Freemason conspiracies in the text, and Roberto Calvi is mentioned by name.

(3) There is an obsession with the number five, conforming to the "Law of Fives."

(4) The book is haunted by a female Green goddess -- not Eris as in Illuminatus!, but Artemis/Diana, the goddess of the hunt. (One of the main characters is named "Diana Hunter" and I finally noticed the reference after getting several hundreds pages into the text).

(5) The book plays with the nature of "reality" and the characters struggle to know what is "really" going on.

(6) The book describes a society arguably ruled by a secret conspiracy.

(7) One character in the book is torn apart by a mysterious invisible shark, "as if by the talons of an enormous beast," as Illuminatus! put it.

I am not even remotely suggesting that Gnomon is derived from Illuminatus! or indebted to it, only that a plausible case could be made for literary references, of the sort that might be found in any ambitious novel. What I have cited may well just be synchronicity but I think a RAW fan reading the book will smile.

In any event, Gnomon is the sort of ambitious novel I enjoy.

UPDATE: I Tweeted this post out, and Nick Harkaway replied, "I loved Illuminatus! and yes, there are *some* nods."

He then read this post and wrote, "Fascinated - the first of these is consciously chosen, not from Illuminatus! necessarily, but from an interest in Leary and Reich which was sparked by it. The others are more nebulous to me…. the law of fives? Was that deliberate? I’m not sure."

"So I wrote a book in which, among other things, a mental template contained in a narrative might be a contagion… and I might myself have been influenced by a narrative expressing the mind of another author…

I loved "The Americans" so I should try Le Carre. I've read a lot of Martin Amis ("Money" and "The Information" are particularly good) and I've never gotten around to reading Kingsley Amis.

All that time wasted on Martin Amis, haha. I like Le Carre for what it's worth and always thought Smiley's People was an amazing novel although it doesn't seem to get much play. I've ordered a copy of Gnomon based on this post! Thanks Tom.