All new editions of Cosmic Trigger II out now 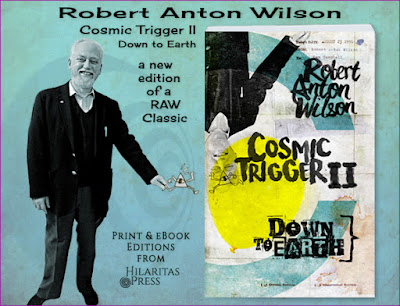 The RAW Trust's Hilaritas Press has released a new edition of Robert Anton Wilson's Cosmic Trigger II: Down to Earth. We've once again run the text through several proof readers (we found some old typos) and totally reformatted the book's interior. Many thanks to Gary Acord and Chas Faris for their excellent help in editing and proofing! Scott McPherson, from amoeba, has created another great cover, and this Hilaritas Press edition of Cosmic Trigger II contains a new Foreword and a new Afterword!

Bob's second book in his autobiographical trilogy is a bit of a departure from volume one in a number of respects. Bob probably said it best in the subtitle, Down to Earth. While The Final Secret of the Illuminati, volume one, had Chapel Perilous as a metaphor, Cosmic Trigger II: Down to Earth uses the Bridge as a similar device. RAW blogger Tom Jackson makes that observation in the new Foreword we asked him to write. We were hoping readers might have a nice short "bridge" to read after volume one and before embarking on volume two. Tom wrote a wonderful short essay.

As Cosmic Trigger II features quite a bit about Bob's home life with Arlen and the kids, Tom had the idea to ask Bob's daughter Christina if she might write an Afterword for this edition. I loved that idea, passed on the request, and Christina did not disappoint!

Also, orders are still being taken for the spiral ring pendant.
on February 26, 2019