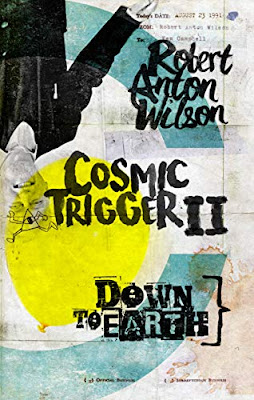 The ebook of Cosmic Trigger II: Down to Earth has been released by Hilaritas Press, and the paper edition will follow within a couple of days, so details are now available. We get to finally see the lovely cover by @amoebadesign.

I wrote the foreword (well, I've mentioned I really like the book) and Christina Pearson, RAW's eldest daughter, wrote the afterword. I want to take a little bit of credit for the latter. I have noticed that Christina's pieces are a highlight of the Hilaritas Press announcements, and it seemed to me that for such an autobiographical book, her writing would be a good fit. So I suggested that she write something, and she agreed!

Here is a bit from Christina's afterword I have received permission to reprint:

Bob and Arlen’s parenting approach developed out of refusing to raise us as they had been raised. They just weren’t sure exactly what that actually meant in terms of day to day life! They certainly loved us, but as true intellectuals, they reveled more in debating linguistic origins, playing Scrabble, sitting around talking about how to save the world, etc., than worrying about what time us kids got to bed. I do have a hunch they would have been much happier together not having children; we were loved, but often not clearly understood in terms of what our developmental needs might be, thus we were mostly treated as semi-equals (little grown-ups) instead of the children we were.

Anyway, what I love about Cosmic Trigger II is that it is very tidal, with Bob’s insights about his own life and development ebbing and flowing over the backdrop of the times my parents lived in Ireland, and their move back to the US. It is certainly biographical, with strong opinions and political musings worked in, but its most powerful message for me was validating what a gentle being at heart RAW really was. He wanted to create; to write, to share, to dream, to play. Like the vast majority born at this time, he spent a fair amount of his younger life doing things to make money that did not necessarily “feed his soul.” At the age of forty, he left secure employment (at Playboy) and took the risk of depending on his writing abilities to feed his family. It was rough at first, and he never made much money, but he was happily self-employed until his death in 2011.
on February 23, 2019

I look forward to reading your intro and Christina's piece. Bob died in 2007, I think.