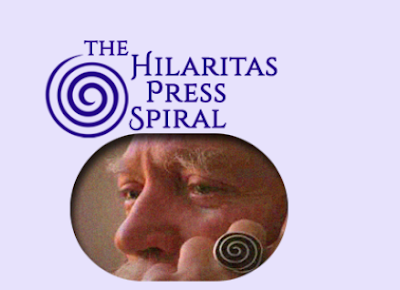 There hasn't been any announcements lately from Hilaritas Press, the publishing house of the Robert Anton Wilson Trust, but the new edition of Cosmic Trigger II: Down to Earth will be out very soon, and in fact there are five books in the "sooner rather than later" pipeline, according to Rasa, who gave me an update on Hilaritas.

Eight books have been published so far: Cosmic Trigger, Prometheus Rising, Quantum Psychology, Email to the Universe, Coincidance: A Head Test, and the three "Historical Illuminatus" books: The Earth Will Shake, The Widow's Son and Nature's God.

• No guarantees, but Cosmic Trigger II should be out on the next one or two weeks. Rasa is waiting on the final proof, which should arrive Friday. An announcement with details about the new edition will be released when the print edition comes out. The second "Trigger" is a personal favorite of mine; look for more news soon.

• Cosmic Trigger III will follow very shortly; Gary Acord is revising the index to reflect the fact that pages numbers will be different in the Hilaritas Press edition from the earlier New Falcon book.

"As soon as he finishes, the book will be ready to publish," Rasa reports. "Scott McPherson’s covers for II and III match wonderfully with the cover he did for Cosmic Trigger I. I can’t wait to see all three books next to each other!"

Rasa believes that with its prologue and epilogue by Wilson, Cosmic Trigger III likely does not need any new material from others, as many of the other volumes have had.  But that's not written in stone yet.

• While an approximate timetable isn't available, from all signs, work is pretty far advanced on Sex Drugs and Magick, The New Inquisition and Ishtar Rising.

"I was working late into the night last night on fixing up the graphics in The New  Inquisition and Ishtar Rising," Rasa told me Wednesday.

Gregory Arnott assisted with volunteer editing for Ishtar Rising. He informed me on Dec. 20 that he was finished and had sent his work in to Rasa.

"They are coming along nicely, but they are probably a couple months, at least, away from publication. Again, you never know. Cosmic Trigger III got together a lot sooner than I expected," Rasa comments.