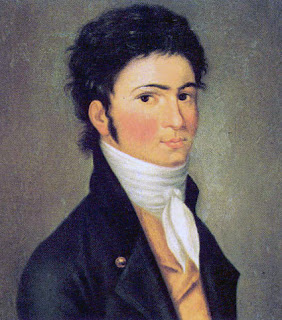 I tend to think of Beethoven’s quartets by their opus numbers. When Kerman refers to them by their keys, I usually have to double check the table of contents to figure out which quartet he means. On classical radio they might refer to a quartet as “Quartet X”, as in one through sixteen. This would confuse me, except they mostly play the early six quartets Op. 18, making it easy to figure out which quartet they mean.

Pg. 37. Casta diva refers to an aria from the opera Norma by Bellini.

I listened to this quartet while following along with the score on Thursday, which I hadn’t done for years. It helped me hear the different personalities of the four parts. In classical quartets the first violin usually has the melody, and the second violin often plays this role as well. As a bass player, I often gravitate to the cello part. The viola part fascinates me more and more as I get older. The viola rarely gets the melody, and when it does, it usually only gets it briefly. The novelist Edgar Pangborn said of Bach, “Listen to the inner voices.” I think that also holds true for Beethoven.
on August 20, 2018

I made a point of listening to the piece before reading the section of the book. (I didn't want to know first what I was supposed to think.) I thought the piece was very good.

I received the book yesterday and have just started into it. The first two paragraphs set a great tone. In the first, Kerman quotes a patron encouraging Beethoven to invoke the musical spirit from Mozart and Hayden. I regard this as magick. In the second paragraph, the theme of the artist and music changing the world gets introduced. We see an allusion to Shelley's quote: "poets are the unacknowledged legislators of the world."

I listened to the Op. 18 No. 3 quartet last night. I love the key of D major, it sounds very warm to me. I also enjoyed the dynamics of the piece, how it can range from soft, lilting and beautiful to loud, strident and intense sometimes in an abrupt surprising shift. At times, it seemed like a dialog took place between the different parts in a call and response fashion.

Me too. I have next week's quartet playing right now, the Smithson Quartet recording.

Reading musicology can certainly shape one's listening. Sometimes it can lead me not to really listen to music which it denigrates. I have to watch that and listen carefully to groups like the Bay City Rollers, etc.

My “Me too” above referred to Tom’s comment that he thought the piece was good. We have contrapuntal comments.

Glad you like the book, Oz. I found that Kerman really complemented Bob Wilson’s magickal approach to Beethoven. I think this becomes more apparent as the book progresses.

Yes, Shelley keeps popping up everywhere. You can’t keep a good poet down.

I went back and listened to Op. 18, No. 3, with the score this morning. I find it interesting how following the score shapes my hearing of the piece.

Oz I too am fond of D Major.Whenever I pick up my Mandolin I tend to warm up in D Major Scale.

Tom I like the idea of listening to the music first. I think ill try that next week.

Are there any other musicians in this group that learned to play by ear? Its seemed to have served me well in my 10+ years as a musician but i am developing a desire to be able to know how to read music these days.

I learned to read music in third grade. I started learning songs by ear in ninth grade, starting with the bass part to the Beatles' "I've Got a Feeling".

I'm afraid that I'm like one of the classical radio folks that Eric decries; rather than the opus number, I pay attention to whether it's the first, second, third etc. quartet or piano sonata or symphony. When someone uses an opus number, I have to look it up to see what's being referred to.

I was interested when Kerman wrote that "Romeo and Juliet" inspired the second movement. One of my favorite composers, Prokofiev, wrote a Romeo and Juliet ballet, and drew some memorable suites from it.

I've read very little on the subject of musicology over the years finding it dry, pedantic and sometimes self-righteously arrogant when the author assumes knowledge of an objective truth or standard in music. Kerman appears refreshingly different. His vividly descriptive writing makes me want to listen again to the piece under consideration. Finding paradoxes and humor in Beethoven's works motivates me to hear that for myself or hear what he means by that.

Kerman brings up the point of the listener's participation in understanding music: p. 27 "The problem is rendered circular and exquisite by the fact that the only sure standard of aesthetic sense - of things "working" comes out of our expanding experience of actual pieces of music." This seems to advocate a gnostic approach to music - in order to hear if something is working musically, listen to it yourself.

The last sentence of ch. 1 comes close to Wilson's notions of model agnosticism and maybe logic: "Our response to art is various and always partial, and therefore open to infinite instruction, so that provisional illumination can be brought to bear from many points of view."

Tom, I did not mean to decry calling the quartet "Number 3" rather than "Op. 18, No. 3". I just find it interesting how different groups refer to works by different names.

I love Prokofiev's "Romeo and Juliet".

Oz, I used to consider musicology dry and pedantic, but Kerman converted me. Interesting comments about Kerman and model agnosticism.

@Eric, I didn't read your remarks that way. It is interesting the different ways people use to refer to the same piece.

P.31 “Two features of this movement are commonly pointed out as significant heralds of things to come: its bold exploitation of contrast and, even more, its motivic single-mindedness.” These are definitely the features I associate with Beethoven, and the first movement of the Fmajor quartet shows them off in style. The short melodic idea that starts the movement, the “motif”, provides the gesture for the entire length, but is confined to just this movement. Contrasts of texture and dynamic keep the small idea from getting stale. The other technique of composition that Beethoven is known for is theme and variation, and this use of the small motif can probably be seen as a version of that technique.

P.35 “An artist does not start out with a beautiful idea or emotion clearly in mind, which he then labors to project through cut-and-dried technical means. The idea becomes known only through the very process of its exploration...” Kerman hits it on the nose here. The beauty of Beethoven’s writing comes through in how he leads us on a journey, takes us by the hand and shows us all of the wonderful sights along the way. We hear him taking these small ideas and turning them over and over until every last ounce of meaning is extracted from them, covering a gamut of emotion and intent, and perhaps hearing Beethoven himself being surprised by the result as well.

There is so much exploration and invention in the first two movements of the Fmajor quartet that it’s easy to see why Kerman practically dismisses the last two movements outright. The scherzo in particular seems like a violin solo with accompaniment, and we don’t have the enjoyable dialogue or interplay of counterpoint. The finale gets back to a more conversational mood, but with everyone having a little too much to say. “The piece bristles with remarkable ideas,” but doesn’t seem to know how to say anything significant, and is little more than a technique display for all of the players.

I would to hear some of these quartets live. Orange County has some terrific chamber music performances. I hope to get to some.