Why was 'Email' one of the first Hilaritas Press books? 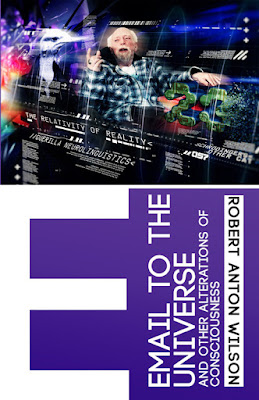 In light of the fact that our Email to the Universe online discussion group begins Monday (with a discussion of R. Michael Johnson's introduction), I thought I'd take a moment to point out that Hilaritas Press, the publishing imprint of the Robert Anton Wilson trust, made Email one of the first books it has put out.

Hilaritas Press is putting out definitive editions of 19 RAW works. (Certain works, such as Illuminatus!, will continue to be published by large publishing companies.)

Here are the 19, in planned order of publication. I've boldfaced the books that have actually been published so far, in paper and ebook editions.

So, why did the RAW Trust decide to make Email the fourth book that it put out? I put that question to Richard Rasa, metaprogramming director for the RAW Trust. He replied:

"We basically looked at Amazon rankings for all of Bob’s books, and then looked at our list of 19 and gave some thought to why some books were more popular than others (we thought of a number of factors, including the slim availability of some titles bringing their ranking down). Even though most of the list follows the Amazon rankings (which seemed to make sense for a number of reasons), we both had some minor preferences for changes near the end of the list. Email to the Universe always seemed like an obvious choice for top of the list, even if it wasn’t ranked #4. I love the idea of Bob going through decades of his writings, finding gems, editing, and putting it all together as an impressively entertaining retrospective. In recently editing the book for our republication, I kept copying out choice excerpts that I knew would be useful to post somewhere, or just to have handy for when I needed to be reminded of a bit of RAW wisdom or humor. It’s one of those books that can easily get mauled if you are fond of underlining meaningful passages. Some passages are frighteningly prescient:"

A monopoly on the means of communication may define a ruling elite more precisely than the celebrated Marxian formula of "monopoly in the means of production." Since humans extend their nervous systems though channels of communication like the written word, the telephone, radio, TV, Internet, etc., whoever controls these media controls part of the nervous system of every member of society. The contents of these media become part of the contents of every individual’s brain.
- “Damnation by Definition” chapter in - Robert Anton Wilson’s Email to the Universe

Note: If you want to join us next week, please get your hands on a copy of Email to the Universe and read Michael's introduction.