Touring show in Britain focuses on the Illuminati 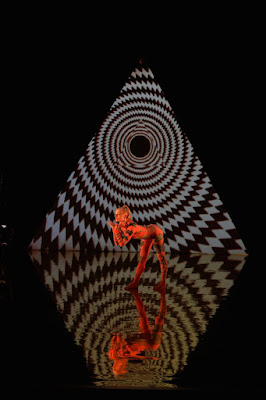 It turns out that the ongoing Cosmic Trigger, the Play show in London isn't the only live event that will interest RAW fans in Britain.

The production from the Rosie Kay Dance Company is winding up its tour of Britain, details here.

"Enter the hypnotic world of MK ULTRA. Rosie Kay’s new work is a high energy, supercharged mash-up of thrilling dance, music and imagery. It is inspired by the bizarre realm of pop culture mind control conspiracies.

"Rosie Kay is one of the UK’s leading female choreographers. She is renowned for her athletic movement, rigorous research and intelligent theatricality. Choreographer to the hit film Sunshine on Leith, Kay is best known for the five star award-winning 5 SOLDIERS.

"MK ULTRA is a CIA code word for a real LSD fuelled brainwashing technique developed by the US military. Popular conspiracy theory believes that MK ULTRA is still active and programmes certain pop stars as puppets of the ‘Illuminati’, a shadowy elite intent on creating a New World Order of authoritarian world government."