RAW at the library

My son Richard, who is just now obtaining his master's degree in library science from the University of Oklahoma, works for the public library in Tulsa. He also is an intern for the library at Tulsa Community College, and recently found himself putting "science fiction" stickers on the spine of Illuminatus!, among other books: 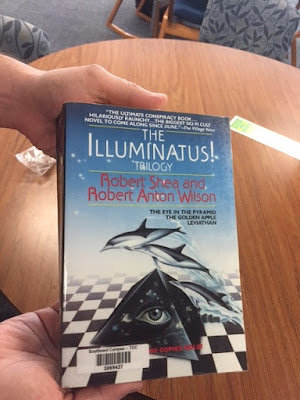 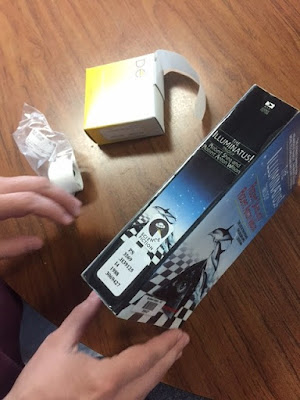 So students at TCC can read it.

The bad news, though, is that the Tulsa Public Library, which serves a pretty good-sized city, does not have any Robert Anton Wilson books. Patrons of the library, however, do have access to quite a few RAW books through the consortiums that the library belongs to.

I just now checked by running a couple of searches, and the Cuyahoga County Public Library, which has multiple branches and serves much of the Cleveland metropolitan area, does not have any Robert Anton Wilson books. (You can do an additional search to go beyond the library system and borrow RAW books from other libraries.) The Cuyahoga County system also has no Robert Shea.

CLEVNET, a network of dozens of northern Ohio libraries including the Cleveland Public Library, does have many of Robert Anton Wilson's books. Also a couple of Robert Shea, but several are missing, including All Things Are Lights.

Which raises a couple of points: Many libraries allow their patrons to suggest new titles. If you are chummy with your local library, you could ask it to buy the new edition of Cosmic Trigger. Also, if you have a library with RAW titles, check them out! Books that sit on the shelves ignored for years get weeded out of the collection.
on May 07, 2017

I've only managed to find one RAW book in even a bookshop, much less a library. Online is the only place ever seen any of his books... Maybe it's the area of the country I live in...

Regarding RAW and libraries: if you spend an a couple hours checking public libraries all over the US, checking his non-fiction books, he's probably one of the most difficult for librarians to catalog. His stuff is all over the place.

Also: having known some librarians who do cataloging, often times something difficult to classify will look to see how the nearest Big City cataloged it. EX: What is _Everything Is Under Control_? First, lots of public libraries own it because it was published by Harper/Collins, so it had good distribution, which meant it got reviewed by Kirkus/Library Journal and a few others that librarians read to get ideas about buying for the public.

So: there's no Dewey number for "conspiracy theories." The San Francisco Public Library has it in true crime, a very popular section of the library: 364.

But the Los Angeles, Santa Cruz, Houston and Seattle Public libraries list it under 909.9: "world history." Why? This seems wrong to me (and maybe you too).

Here's probably the reason it's under 909 more than "crime": prominent publishers far more often obtain the "Library of Congress Cataloging-in-Publishing" data. The LoC person "read" the book and decided on 909. Your own copy will show this. Other librarians find it easier to follow the leader and just take the L of C's word for it. So, I end up thinking the librarian at San Francisco actually spent time trying to figure it out, and appreciate their effort.

Where would you put _The New Inquisition_? LAPL has it under 149, which is where Korzybski's often found: the 100s are Philosophy and 149 is sort of an "Other" category. But it could go under 500, which is basic science. You'll find Thomas Kuhn's famous book under 501 "Philosophy of Science." But the Charles Fort books usually go under 001s: "General Knowledge."

However, a lot of RAW's non-fiction books will be found under 133, "specific topics in parapsychology and occultism," which to me, is lazy, and in many cases: probably literally judging a book by its cover.

This was also an issue when bookstores were more common -- it was hard to guess where a RAW book might be shelved, unless it was obviously fiction. Even then, it's kind of hard to guess where they'd put the "Historical Illuminatus!" novels. My mass market paperback of "The Widow's Son" says "fantasy" on the spine, so it would probably be shelved in the science fiction section. (I used to love going to malls, because there was always a bookstore, there was a record store, and there were pretty girls walking around. I guess the babes are still there.)

This seems less of an issue today, when the common method to find a book is simply to search by name or title, whether you are on Amazon or going through an online library catalog.

There's a line RAW used a few times in his talks: that when he went into bookstores his books were shelved next to "Von Daniken" but one day he saw he was in Philosophy near "Wittgenstein," which made him feel better.

Manic The Doodler, I do not know what area of the country you live in, but when it comes to finding RAW's books in libraries and bookstores, it seems to me that it really does not make much of a difference or advantage if you live in a bigger city or college town. For example: Wilson lived in Berkeley at 2035 Channing Way apartment building in the early 1970s. A walking distance from 2035 Channing Way, University Press Books (UPB) Bookstore - Ten Thousand Minds On Fire opened in 1974 on Bancroft Way (UC Berkeley campus). Unfortunately RAW does not appear to be among "ten thousand minds on fire" - the bookstore does not have a single RAW book on shelves. Since I live in Berkeley I decided to attend the Slow Reading Dinner at UPB hosted by Bill (owner of bookstore) who encourages readers to "bring a poem, a treasured paragraph, or any combination of words that you love - words that must be read carefully and savored slowly...."

First time I attended the Slow Reading group I read from "Illuminati Papers: Join the HEAD Revolution." What sort of surprised me and puzzled me is that out of 10 people only one heard (and read) of Wilson. Even the owner of the bookstore has never heard of Wilson and he seems about the same age as Wilson would be today. Now, every time I attend the reading group I read a chapter from a different book by Wilson.

Another example: Berkeley Public Library has only "The Illuminatus Trilogy" and "Playboy's Book of Forbidden Words" (library use only).

Another example: A few days ago I was in San Francisco and I visited City Lights Bookstore - there was only one book on the shelf - "The Illuminatus Trilogy". Of course, I am always very glad to see RAW books on the shelves; I just wish there were more of them and not just science fiction.