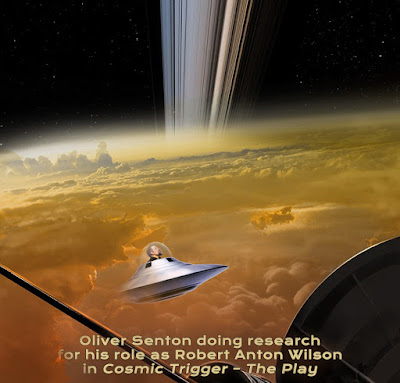 Mersa Auda reviews the Cosmic Trigger play for TheUpcoming and gives it four out of five stars: "The lack of a solid thread binding the whole play together is felt (and longed for) at times, but the spirit of the production is exemplary in that it acts as a reminder of what theatre should always strive to do: innovate, experiment, and instigate thought and feeling." (Hat tip, Michael Johnson).

David James of London City Nights awards five out of five stars: "Perhaps this isn't the most objective of reviews - I went in a fan of Robert Anton Wilson and, let's face it, any play that features Alan Moore as a supercomputer called FUCKUP is going to be hard for me to resist - but this was one of the most enjoyable, uplifting and entertaining plays I've seen in quite some time. The cast are all fantastic, the stagecraft is phenomenal, and the writing is sensitive, witty and (when it needs to be) outright heartbreaking."