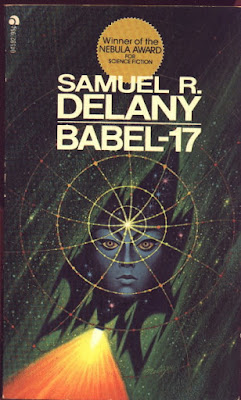 The essay "The Celtic Roots of Quantum Theory," included in this week's edition of the Email to the Universe online reading group, includes a reference to the Sapir-Whorf hypothesis:

According to the Korzybski-Whorf-Sapir hyptothesis, the language a people speak habitually influences their sense perceptions, their "concepts" and even they way they feel about themselves and the world in general. "A change in language can transform our appreciation of the cosmos," as Whorf stated the case.

[boldface in the original]

As it happens, I just finished re-reading my favorite Samuel R. Delany novel, essentially a dramatization of the Sapir-Whorf hypothesis in the form of a space opera, Babel-17. The heroine is a poet who is asked to translate the code the enemy uses in an interstellar war. She discovers that it is a language. I don't want to spoil the plot by telling you anything else. I urge you to read it before you read more about it. It's not very long, and it's also available as an audiobook. I have no idea if RAW ever read it, but I'll bet he would have liked it.

I've also read a number of other Delany books, and enjoyed most of them. I like The Einstein Intersection, Nova, Driftglass (a great early story collection) and The Motion of Light in Water, an autobiography. I thought Dhalgren was bloated and hard to read, although I succeeded in finishing it, something many SF fans could not say when it first came out. I liked bits of The Jewel-hinged Jaw, an anthology of criticism.

Here is a nice appreciation, via Supergee, but don't read it until you've read the book. If you read this post because you like science fiction, you should read Supergee's blog.