Butterfly Language: Why I started the blog 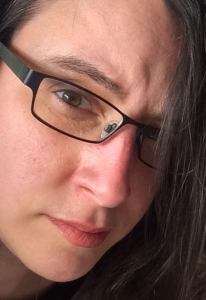 If you read the Butterfly Language blog, you can't help but notice what a burst of energy seems to be behind it. For example, there were four blog posts on May 26. Blog writer Valerie D'Orazio has a lot on her mind and has a lot to share.

Val is hugely influenced by Robert Anton Wilson, and if you are curious about her blog and what gave rise to it, you should read her fascinating recent autobiographical piece, Soul Detours, which describes how she changed after suffering a severe blow to the head. One paragraph:

I also began reading a lot of Robert Anton Wilson and Philip K. Dick. I was familiar with them before, but now I was really “diving” into the material. They too were a valuable source of support. I felt like they both had gone through some similar experiences as I had, especially Dick. I felt that Wilson’s skeptical (“agnostic”) approach was going to be the most helpful for me.

I also felt a deep connection to the whole period of time they operated in, especially the decade of the Seventies. I suppose I was feeling a little bit of time-centered dysphoria, as well.

Although it's not as dramatic as Val's feelings, I suffer from a bit of time dysphoria, too: I've wished for years I could have been a teenager in the 1980s, instead of the 1970s. I would love to have been a teen during the rise of personal computers, MTV, bulletin board systems, cyberpunk, etc.

One of Val's transformations was that "My taste in music changed. I suddenly became very interested in jazz and progressive rock, two genres I had only a very limited patience for previously. I now yearned for long, sprawling compositions; anything released in the early-to-mid 1970s was a special favorite, especially on the original vinyl." As a 1970s teenager, I listened to a lot of Yes, Chick Corea, ELP, Jefferson Starship concept albums, Kansas, Genesis, Mahavishnu Orchestra, etc., and saw some of those guys in concert during their salad days. But I'd still swap decades with Val. I got interested in Beethoven, Bach, Stravinsky, etc. as a teenager, but in hindsight I wish I had explored classical music more thoroughly, rather than just treating it as part of the "buffet" that included progressive rock, hard rock, Beatles, Stones, too much Jefferson Airplane, blues, jazz, etc. etc.
on May 27, 2017

Born in 1970, totally willing to switch.