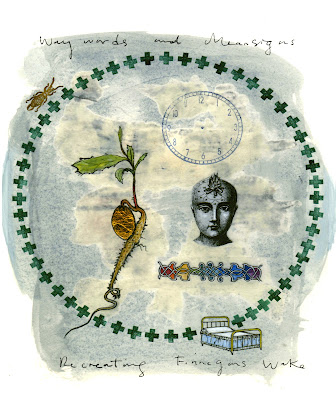 The new edition of Waywords and Meansigns has been released. That's the project that sets James Joyce's Finnegans Wake to music. Here is the announcement from the project's leader, Derek Pyle:

Dear Friends of the Wake,

It's May 4th! Finnegans Wake turns 78 today, and to celebrate we're releasing the 2017 edition of Waywords and Meansigns, setting Joyce's book to music.

Since beginning this project in 2014, over 300 people have worked to create what is now some 70 hours worth of audio. Today we release 123 tracks spanning 19 hours 23 minutes and created by contributors from 15 different countries. All freely distributed at www.waywordsandmeansigns.com/listen/opendoor-edition/ This year's album art, seen above, is from Heather Ryan Kelley.

The range of weirdness and wonder gathered here is stunning, to say the least. It's like Finnegans Wake bred with an alien bacteria and gave birth to a whole new species of music.

We're also excited to release a chapter which was originally scheduled for our 2016 edition, Mike Watt and Adam Harvey's recording of "Shem the Penman". Raymond Pettibon also provided us with an image to accompany that chapter.

As previously announced, this will be our final group release for Waywords and Meansigns. But we've made this release an "open edition" -- unlike our previous releases which were unabridged, this one is incomplete, meaning YOU are invited to record your own passage, and we will add to the edition on an ongoing basis. Get involved!

We made this stuff to share with you, so please spread the word! and as always, I love to hear from people, so write me back your thoughts and impressions.

The audio is waywordsandmeansigns.com/listen/opendoor-edition/. You can also locate specific recordings on our Artists page.

On a personal level, I must say thanks to all of you for your support these past three years. It has been an incredible adventure, and the best part has been getting to know so many of you. If you're interested I wrote a note on our blog, reflecting on the journey of this project and lessons I've learned along the way.

And if you're curious about what I'm up to next after Waywords and Meansigns, check out my new website www.derekdpyle.com.

That's it for now.

And again. Really and truly. Thank you for supporting this work.