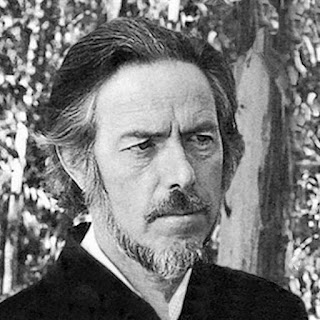 A few days ago, Michael Johnson called my attention to an article by Tim Lott in Aeon, "Off-beat Zen: How I found my way out of depression, thanks to the writings of the English priest who brought Buddhism to the West," a piece about Alan Watts.

Michael remarked, "Watts was a huge personal influence on RAW."

You can see evidence of that in Lott's essay. Here are the first couple of paragraphs:

Ever since I was a child, I have been acutely sensitive to the idea — in the way that other people seem to feel only after bereavement or some shocking unexpected event — that the human intellect is unable, finally, to make sense of the world: everything is contradiction and paradox, and no one really knows much for sure, however loudly they profess to the contrary.

It is an uncomfortable mindset, and as a result I have always felt the need to build a conceptual box in my mind big enough to fit the world into. Most people seem to have a talent for denying or ignoring life’s contradictions, as the demands of work and life take them over. Or they fall for an ideology, perhaps religious or political, that appears to render the world a comprehensible place.

The bit about falling for an ideology sounds a lot like getting trapped in the reality tunnels that RAW wrote about.

My personal ‘enlightenment’ came and went — but I hope it might return. Perhaps this article will be the first step in that direction. It feels like it is. It might be in my hands or it might not. But if I can find the path again, then I will stay on it — until I lose it. And, as the Zen saying instructs, if I see the Buddha, I will kill him. Because the moment you start thinking of yourself as ‘enlightened’, you are not.

The last sentence sounds like the Cosmic Schmuck principle, no?

Oh great, I'll check that out. Alan Watts is my favorite!

In one of his books, RAW says that he met Watts through Playboy Magazine (RAW was an editor and Watts a contributing writer).

He says one of his first mystical experiences came as a result of a comment by Watts' then-wife. RAW was talking about living in the moment and Mrs. Watts said, "Where else can you live?" RAW said he was walking in a daze for days after that.

Alan Watts also told RAW that he'd read a really interesting book by Israel Regardie (_The Eye In the Triangle_) about Aleister Crowley, which began RAW's odyssey as a Crowley exegete. RAW said that if Watts mentioned a book was worth reading he took Watts seriously and made it a point to read those books.

Shortly after reading Stranger in a Stranger Land, I read my first Alan Watts book. Oh. That's what "Thou art God" means. (Well, one part of it.) Watts introduced me to the whole Hindu/Buddhist/Taoist thing (and as a full-fledged sloppy syncretist, that's how I still think of it). Yes, I do realize that quantum physics doesn't really tell us that we must eat our vegetables and refrain from clubbing baby seals, but the images of unity and wholeness and interdependence that the East teaches us do have some relevance. Watts may be the best spokesman for this sort of thing, or at least he speaks to me, and he has furnished my mind: Light shines in darkness because what else would it shine in? The environment is my body. Laws against consensual sex and drugs turn the police into armed clergymen. And more.

Watts may be the best spokesman for this sort of thing, or at least he speaks to me, and he has furnished my mind Obat Infeksi Saluran Pernafasan Anak

The world is changing fast. people are also being transformed. day by day we are becoming more dependant on degital system. you are making me think of this really. You have a great method of sharing your thoughts

Thanks for share with us this awesome blog.
Jaipur Call Girls Service
Dehradun Escorts
Delhi Escorts Service
Escort in Gurgaon
Escort in Manali

This page is very interesting .. what you intend to see my web, but the appearance is very much different to have this .. my page discusses Obat flu batuk herbal tradisional yang aman ini terbuat dari teripang emas berjenis Stichopus Variegatus

Do you know about the disease Anorexia Nervosa, Bulimia and Obesity? Check out some of his articles.

happy to be able to visit your site, thanks for sharing information
http://blogderrykurniawan.blogspot.com/
https://blogkesehatandanpengobatan.wordpress.com/

Oral health can be an indicator of quality of life. Therefore, in order to survive humans need energy from food. pengobatan sakit gigi

Everyone will want to have clean and strong teeth, fresh breath, and gum pink and do not bleed, is everyone's dream. obat sakit gigi anak

Drug dengue is a disease called dengue virus to be transmitted by the mosquito Aedes aegypti and Aedes.
http://obatdemamberdarahataudbd.blogspot.co.id/

Benefits and Benefits Minya Fish For Sight Eye - Fish oil does not have a direct impact on the eye. However, fish oil may play a role in certain conditions that can improve vision health.

When you understand to get out of penangnan blockage of blood vessels so that it can have deadly consequences for patients juka someone who died as a result of this case. This disease can affect this part of some members of the body of the second of the kidneys, heart brain.
ginkgo biloba plus capsule
pengobatan darah kental

Thanks for this. I honestly like what you've posted here and want you the pleasant of luck with this blog!
Bold Model Escorts in Gurgaon

I love your post it is really interesting for reading thanks for sharing with us.
Escorts in Chandigarh

I can feel that the articles contained in this blog is so interesting. I also get a variety informasin, thanks.
pengobatan alami penyakit itp