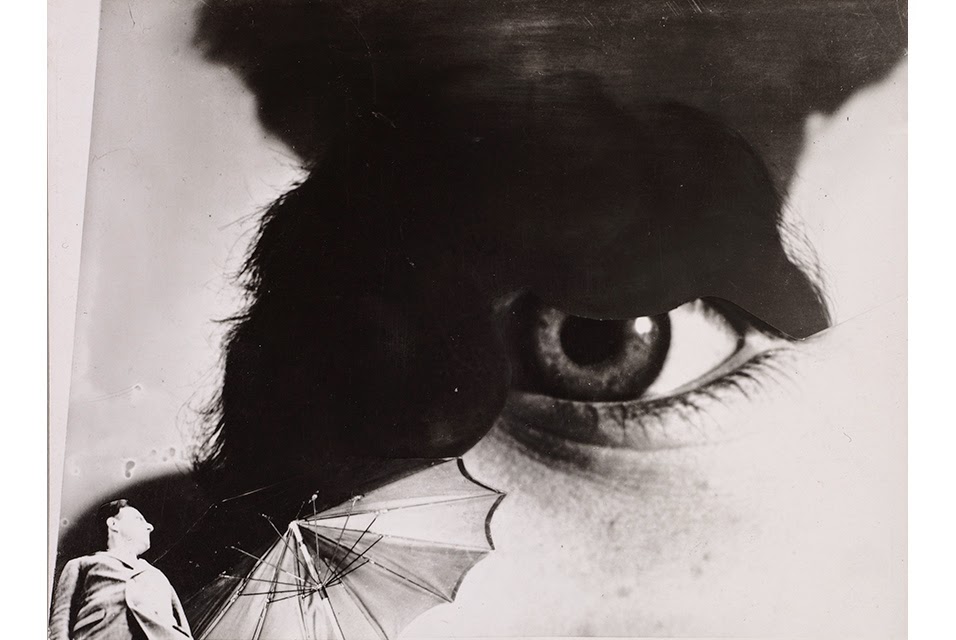 Photo Eye by Anton Stankowski, one of the photographs featured in Forbidden Games, a current photo exhibit at the Cleveland Museum of Art

A few days ago, my wife accidentally brought him a movie called "The Double" for us to watch. She thought it was a thriller, but it turned out to be quite surrealistic, so she gave up in disgust while I watched it, delighted. Not the least of the visual affects was the depiction of the heroine, played by Mia Wasikowska, who seems more like an angel in her white dress than a "real woman."

I can't seem to get away from surrealism lately; this weekend, I went to an exhibition of surrealistic photography at the Cleveland Museum of Art. (The photograph at the top of this blog post is featured in the exhibition.) And I spent much of my time this weekend watching old videos of "Twin Peaks," including the vivid dream sequence in which FBI Special Agent Dale Cooper finds himself sitting in a room with red drapes and a dwarf, sitting across from an eerily beautiful Laura Palmer who in the dreamworld has come back to life. In "real life," Sheryl Lee seemed almost too beautiful to be real, and even though she was written back into the show as "Maddie Ferguson," Laura Palmer's cousin, her real power in the series comes from a series of luminous images, such as her senior portrait or in the dream scene.

Treating sex as something magical seems like one the key insights of surrealism to me and the magical sense of sex, the way it serves as a connection between two people, something beyond anatomy or physical gratification,  is one of the key points of the lecture Saul Goodman is delivering to his wife even as he makes love to her, concluding the Sixth Trip of Illuminatus! It might be useful to compare Saul's monologue in this section with Molly's monologue at the end of Ulysses. Molly talks about sex and concludes with an ecstatic exclamation that focuses on herself ("and then I asked him with my eyes to ask again yes and then he asked me would I yes to say yes my mountain flower and first I put my arms around him yes and drew him down to me so he could feel my breasts all perfume yes and his heart was going like mad and yes I said yes I will Yes.") Saul's monologue concludes with his focus on his lover ("Rebecca. Beautiful, beautiful. Rebecca. They don't want us to. Unify. The. Forces. Rebecca. Rebecca. Rebecca.")

"You see, we're trying to break through our skins into each other," Saul explains on page 383.

Saul's monologue seems to connect both with sex magick (a major theme of Schroedinger's Cat) and with Wilhelm Reich ("One scientist knew. He died in prison," page 383.)

"the asshole, unfortunately, had turned out to be the Vice President of the United States," page 382, Spiro Agnew, Richard Nixon's vice president.

Epicene Wildeblood reviews Illuminatus!, page 381, "I really tear these two smart-asses apart." He's reviewing a novel, not knowing that he's in a novel himself. And are we part of somebody else's "novel"? Twin Peaks does a nice job with this; the characters are in a TV show, but many of them obsess over a soap operation. "And though she feels as if she's in a place, she is anyway," as the Beatles sang in "Penny Lane."

(Next week: Page 385, beginning of "The Seventh Trip, or Netzach (The SNAFU principle) to page 398 "two hundred thousand lawyers working for the bureaucracy these days.")

I've only had a chance to read a few pages, but have already noticed a few coincidences with this weeks reading. It starts with Harold Canvera, a drugged, paranoid right wing accountant who "performs educational services" for W.H.O.R.E.S. - White Heros Opposing Red Extremists, a "splinter of God's Lightening.". We soon get told the Illuminati do what they do "so the International Bankers a certain minority group (in italics) can run everything."

This section ends with Saul Goodman making love to his wife Rebecca saying her name three times at the very end. This seems the exact opposite of paranoia though Saul appears a little paranoid or at least wary. Saul and Rebecca are Jewish - "a certain minority group" while Rebecca being a black woman belongs to 3 minority groups. I don't remember if she converted to Judaism, but her name is Hebrew and "represents beauty in the Bible."A very appropriate ending to this chapter.

W.H.O.R.E.S. appears another alchemical union of opposites, and also similar to Joyce's 'Buildung supra buildung. White against red suggests to me the Biblical parting of the Red Sea which appears alchemical code for learning how to internally dissipate anger. White Heros and Red Extremists also = the Red Lion and White Eagle of traditional alchemy.

It says in the notes that Rebecca is Irish.

For some reason I've always pictured Rebecca Goodman as a beautiful African-American woman. Going from a prostitute to the object of Saul's adoration provides a living demonstration, in the novel, of the transformation from WHORE to White Hero.

Saul repeats Rebecca 3 times at the end of the chapter. Rebecca represents beauty so qabalistically this suggests the path of Zayin which connects the 3rd and 6th Sephira and the Lovers tarot card which seems apropos to the scene. Yet, it's more than that if one reads the description of that card in "The Book of Thoth."

p.370 Simon Moon places Illuminati International at 34 East 68th Street, New York City. On page 374 in the first paragraph we see three instances of a 3 and 4 beside each other starting with Pi - 3.1417 - a three and four with .1 in between. I didn't get any particular read on whay this 3, 4 combination until I realized that the third tarot atu is The Empress while the fourth one is The Emperor.

denounced those, such as Brion Gysin, who believed it. p. 371:
The reference to Gysin's belief about the origins of the white race in a nuclear explosion that took place in the Gobi desert can be found in Burroughs' 'Why Can We Not Begin Anew?' and his novel, The Ticket that Exploded. It is hard to under-appreciate the influence of Gysin's mythoscape on Burroughs...And it is great to see that Wilson (presumably) had a strong sense of Gysin's work.

Also, the final pages wherein Sal is 'unifying forces' with Rebecca brings up the interesting point of Discordian sacred sex. It isnt something I have thought of before, but Wilson's conceptualization of Discordianism framed sexuality as a sacred act which held within it the possibility to transform oneself. Funny, tt is wholly missing from his outline of Leary's 8-circuit model of consciousness in Prometheus Rising...