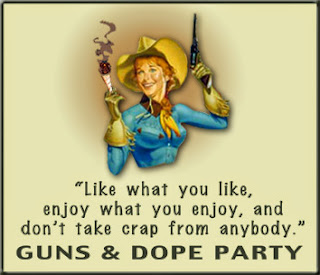 Robert Anton Wilson's Guns and Dope Party was a libertarian party in California that attempted to form a coalition of gun nuts and potheads. (The point, if it isn't obvious, is to unite right wingers and left wingers under a common "mind your own business" banner.) There's still an official page, which has its own URL but is sponsored by the official RAW website.

On libertarian magazine Reason's Hit and Run blog, Jesse Walker and Jason Keisling point out that the ideology of the Guns and Dope Party appears to doing well in at least some areas of the U.S. Using a Venn diagram, they show that there are 16 states which both allow some form of legal marijuana (typically "medical" marijuana) and which allow concealed carry of guns. The sixteen are Alaska, Arizona, Colorado, Illinois, Maine, Michigan, Minnesota, Mississippi, Montana, Nevada, New Hampshire, New Mexico, Oregon, Rhode Island, Vermont and Washington. Alaska is the most libertarian of the 16: A perfect Guns and Dope state, as it allows unrestricted concealed carry of firearms and has legal pot.

But can u still shoot straight when you're really stoned? ; )

The FREEDOM to shoot erratically is part of the American Way of Life. Who cares about a few fatal bystander casualties
when FREEDOM's at stake?

Good to know that such kind of posts are there to help ignorant and novice people.