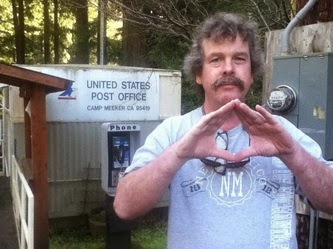 I've just published a new interview with Adam at my new books blog at my day job (which I invite all of you to check out, seeing as  how many of you like to read.)

Sandusky Register:  Your new book, "Caught in the Crossfire: Kerry Thornley, Lee Oswald and the Garrison Investigation," tells the story of counterculture figure Kerry Thornley, who began writing a novel about Lee Harvey Oswald BEFORE the JFK assassination. Since you already wrote the definitive biography of Thornley, why have you written a new book?

Adam Gorightly: Kerry Thornley, in my opinion, was one of the most fascinating figures to emerge from the sixties counterculture, although his story is not widely known in popular culture and is overshadowed by the more well known characters who left their imprint on the sixties scene, such as Tim Leary, Ken Kesey or Hunter Thompson.

As recounted in Caught in the Crossfire, Kerry Thornley became embroiled in Jim Garrison’s investigation, and because of this — as well as his association with Lee Harvey Oswald — Thornley is most well known in relation to the Kennedy assassination and less for his endeavors as co-founder of the “spoof religion” Discordianism and as a leading thinker and writer of the early Anarcho-Libertarian scene that greatly influenced Wilson and Shea’s Illuminatus!

During the course of research for my 2003 book "The Prankster and the Conspiracy: The Story of Kerry Thornley and How He Met Oswald and Inspired the Counterculture," I was introduced to the Discordian Archives by Dr. Robert Newport, who had been friends with Thornley and Discordian co-founder Greg Hill, and portions of these archives were used as source materials for the The Prankster and the Conspiracy. In the years to follow, I was introduced to more of these Discordian Archive materials, including a box of items directly related to Kerry Thornley and the Garrison Investigation. These materials prompted me to write "Caught in the Crossfire" because after reviewing these materials I realized I’d only scratched the surface regarding Thornley and the Garrison investigation in my earlier book.