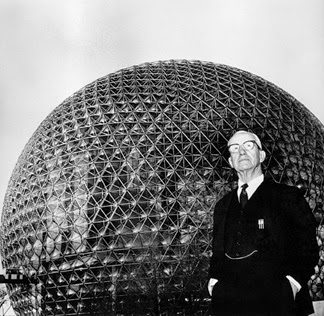 Buckminster Fuller, in front of geodesic dome. We encounter him more than once in Illuminatus!, including on page 393, where is he speaking in London, "explaining why where were no nouns in the real world.")

(This week: Page 385, beginning of "The Seventh Trip, or Netzach (The SNAFU principle)" to page 398 "two hundred thousand lawyers working for the bureaucracy these days.")

The Illuminati in Illuminatus! are a  hierarchical group, but the Discordian guerrilla ontologists in the trilogy who oppose them are a decentralized bunch who stick apart. Simon Moon is sometimes in contact with Hagbard Celine, but Markoff Chaney does not seem to be in contact with anyone on the same "side."

Aren't the folks in the movement to keep Robert Anton Wilson's writings and ideas alive in a position analogous to the heroes of Illuminatus! ? We aren't getting very much support from academics. The most prestigious critical journals never found RAW when he was alive, and they haven't rediscovered him yet. We get no funding from the National Endowment from the Arts. There's no Library of America edition in the works. Instead, the "RAW movement" is essentially a bunch of independent blogs and Twitter accounts and websites and authors and artists and musicians and Facebook page operators and computer programmers and who knows who else. We suppose each other as we can, of course, but we operate independently.

OM was originally instigated by Ho Chih Zen, of the Erisian Liberation Front, who is the same person but not the same individual as Lord Omar Khayyam Ravenhurst, author of The Honest Book of Truth. The guiding philosophy is that originally proposed in The Theory of Games and Economic Behavior by von Neumann and Morgenstern: namely, that the only strategy which an opponent cannot predict is a random strategy. The foundation had already been laid by the late Malaclypse the Younger, K.S.C., when he proclaimed, "We Discordians must stick apart." This radical decentralization of all Discordian enterprises created a built-in random factor even before Operation Mind-fuck was proposed.  [Ho Chih Zen, sometimes spelled "Ho Chi Zen," and "Lord Omar Ravenhurst" are pen names for Kerry Thornley -- the Mgt.]

And we are all individuals, responsible for our own successes and mistakes. There's a quote from Hagbard Celine's Never Whistle While You're Pissing at the beginning of the section we have just begun, the Seventh Trip, page 385, about how Damned Things, individual human beings, won't fit into the slots bureaucrats and others create for them. Markoff Chaney certainly isn't a good fit in everyday society, but nobody is a perfect fit.

There's another quote from Never Whistle While You're Pissing in the appendix, page 791:

It is easy to see that the label "Jew" was a Damnation in Nazi Germany, but actually the label "Jew" is a Damnation anywhere, even where anti-Semitism does not exist. "He is a Jew," "He is a doctor," and "He is a poet" mean, to the card-indexing center of the cortex, that my experience with him will be like my experience with other Jews, other doctors and other poets. Thus, individuality is ignored when identity is asserted.

In the recent posting about libertarianism, Fireflye calls me out a little bit, writing, "Since this is a blog about RAW, how is it that no one seems to understand the point that calling ones self anything and banding together with others under any label kills free thought?" His point is well taken, but I would answer that labeling is a tool, a method of "finding the others," even if we have to remain careful not to remain wedded to labels, to use labels and analogies as a tool that can be discarded. The raft has the purpose of crossing over, not of being clung to.

Page 385, I'd forgotten that Markoff Chaney attended the same university as Simon Moon, Antioch University (a real school in Yellow Springs, Ohio, where RAW once lived.)

"His Fort Sumter, as it were," non-American readers may not know the South launched the American Civil War with an artillery attack on Fort Sumter in Charleston, South Carolina.

(Next week: Page 398, "The Indians were a band of Shoshones," to page 406, "even though he was now convinced it was the system he himself had been growing toward for many years.")

Combining Hagbard's explanation of the difference between Erisian, Eristic, and Discordian (p.321), and the Theory of Games and Economic Behavior in Appendix Yod (p.783), its is clear that Chaney is one of the most effectively subversive types of people, namely, an autonomous Erisian. This subversion will be both creative and destructive.

The fact that he does not even know that the Illuminati exist suggests that he is pure erisianism, which is not necessarily falll in line with the Discordian ideologies. In fact,
his begrudged misanthropy seems to suggest that he has chosen a trip composed of disorder and order (essentially the Curse of the Greyface p.312) and not, primarily, creation over destruction... um... where was I going with this...?

"Norton's Emporium" p.387, a reference to Emperor Norton, another pure Erisian, although one who chose creation (e.g. issuing his own money, negotiating peace) over destruction and not merely disorder over order.

"Every man and woman is in rebellion, but only..." p.397, this was underlined in my book from a previous reading. Great line, any one know where it comes from?

This would seem to paraphrase Aleister Crowley, "every man and woman is a star"

Compare with Robert Anton Wilson, "It is a great privilege to be conscious in this universe. Those who understand, shine like stars," in the New Libertarian Notes interview.

Hi Tom, thanks for your note. I was thinking about those individuals who are in rebellion and do not have the guts to admit it. Would they be led to sabotage their lives in the same way they unconsciously sabotage their workplace? If so, it sounds vaguely like something found in scientology.