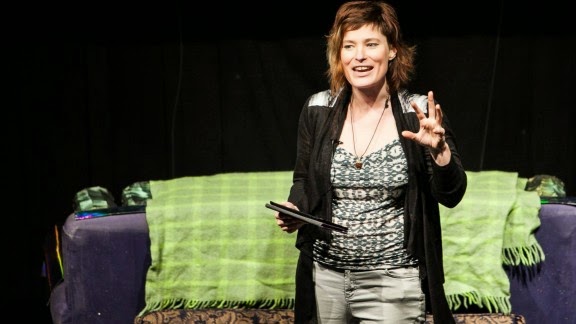 On the eve of the launch of the Cosmic Trigger play, Psychedelic Press UK publishes a new interview with Daisy. Here's an excerpt explaining why she adapted Robert Anton Wilson's Cosmic Trigger: The Final Secret of the Illuminati:

“It’s a non-fiction sequel; it’s a tribute to Robert Anton Wilson, who as far as I’m concerned, is not remembered enough by as many people as he ought to be and alongside the likes of Aldous Huxley, William Burroughs, Alan Watts, James Joyce etc, and that he really is a fantastic counter culture figure…

"It dawned that Cosmic Trigger was the book that Robert Anton Wilson had written directly after Illuminatus! It dealt with all the strange stuff that happened to him as a result of writing the book and I suddenly thought: this could be good…  I’m gonna have to test this to see if the forces that be really do demand this book.” Page 223 of Wilson’s Cosmic Trigger confirmed the answer. “It was all about the time when Wilson had been to visit my dad at the Science Fiction Theatre of Liverpool. That’s what’s on page 223.

Do you follow me when I say it kinda wasn’t my idea? I remained open and I still do, and this became the entire controlling principle of how the entire show is coming together: it’s based on signs and symbols quite early on in the process.”
on November 21, 2014

Game online a lot of people who love to help them relieve stress of the moment, such as TinyTanksandTinyPlanesorTiny Planes Beta is the fighting game with a pen or pencil, you have to destroy opponents before they kill you. Or Run 3 Unblocked and Hacked unblocked Gamesare skillful game controller for bears to dance to the goal without falling off a cliff. I wish you happy gaming!

head soccer unblocked And head soccer the game of football is full of fun. Not only that head soccer 2 and soccer heads