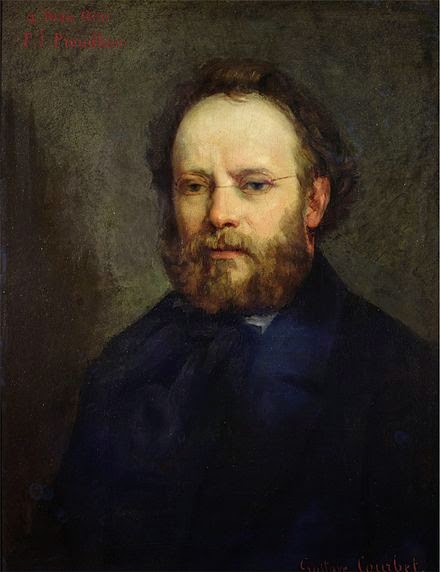 Pierre-Joseph Proudhon, considered by some the founder of anarchism. He was not just being French when he discussed different forms of property, Wilson and Shea explain in the appendix of Illuminatus!

The discussion on property in this week's selection contains the underpinnings for left libertarianism and also illustrates how referring to the appendix of Illuminatus! can make portions of the main text easier to understand.

Broadly speaking, there are three main groups of anti-government types.  One group consists of traditional anarchists, the folks on the left who don't recognize private property at all. Another group is the anarcho-capitalists, very similar if not identical to the Randians, who recognized all forms of private property, regardless of how it was acquired. Those folks, more or less, comprise the majority of those in the U.S. who refer to themselves as "libertarians."

The third group would be the left libertarians, the folks who fall into the slogan "markets, not capitalism," the kind of folk who hang out at the Center for a Stateless Society. They recognize that modern capitalism cannot be distinguished from the power of the state, and that not all forms of private property deserve equal respect.

While almost all anti-government folks agree on many issues — e.g., freedom of speech, non-intervention in other countries, live and let live in personal lifestyles — the disagreement on property crops up in all kinds of ways. For example, it's a factor (although not the only one) in the disagreement between "vulgar libertarians" and more leftist libertarians on whether a basic income guarantee is a good idea.

"Property is theft because the Illuminati land titles are arbitrary and unjust. And so are their banking charters and railroad franchises and all the other monopoly games of capitalism — "

"Of state capitalism. Not of true laissez-faire." (page 411)

The stoned discussion between George Dorn and Mavis perhaps is made more clear in Appendix Zain, Property and Privilege, which quotes Proudhon and explains why property, in different contexts, is theft, liberty and impossible. "Proudhon, by piling up his contradictions in this way, was not merely being French; he was trying to indicate that the abstraction "property" covers a variety of phenomena, some pernicious and some beneficial." (Page 767).

Notice the use of the word "privilege" in the title of the appendix section. Gross abuse of state power — such as the transportation of people as slaves from one continent to another — still have something to do with the distribution of wealth in the U.S.

"No Govenor" was the name of a series of anarchist fanzines published by Robert Shea. There were 11 issues, archived at the official Robert Shea website.

A quote from Robert Anton Wilson: "There is no governor anywhere; you are all absolutely free. There is no restraint that cannot be escaped. We are all absolutely free. If everybody could go into dhyana at will, nobody could be controlled -- by fear of prison, by fear of whips or electroshock, by fear of death, even. All existing society is based on keeping those fears alive, to control the masses. Ten people who know [this] would be more dangerous than a million armed anarchists." Can somebody give me the source?

Some "No Governor" discussion from Schroedinger's Cat.

The Illuminatus! use of "privilege" treats it as "private law": ways in which the system is fixed to benefit the 1%, which couldn't possibly be given to everyone ("You lost money at the stock market? You're too big to fail. Here's some more.") But the word is now used by social justice warriors to mean anything some people have that others don't (even not being a victim of rape or domestic violence). That can be useful, for instance, in pointing out that black people suffer worse things than being mistaken for a racist by somebody who can't do you any harm, but it does mean that often privilege is not the problem, but absence of privilege is.

To quibble a bit about the definition of satori here:

(2 Satori refers to an experience that hints at the reality of Awakening but
does not fundamentally change the mind set. A number of satoris may precede Awakening but they are not It.

3 My late teacher Shunryu Suzuki Roshi
once famously said in a lecture: "There are no enlightened persons, only enlightened actions."

(4 Back in the day when Illuminatus was written terms like Zen, satori and enlightenment were common in the vocabularies of some who didn't know what they were talking about. Not that much has changed.

'you're back in the trap again' p.407
This is a Reichean term, 'the trap,' which refers to how society's structure (and Western knowledge) perpetuates the 'emotional plague' in humanity. It does this by diverting attention away from healthy human practices and higher orgasmic potential.

'the nation of Me...' p.408
Following George's rap with Hagbard, his conversation with Mavis reads like a philosophical sequel or appendix. I found this part of their exchange particularly interesting as it seems to complicate Hagbard's teaching on the I vs Robot dichotomy. Hagbard explains that you must reconcile your reactionary behavior, Pavlovian responses, million year old genetic memories \with/ your ego, or mind, or, at least, the homunculus part of your brain that apparently watches and frets over the robot. The errors H. warms him about are when you cannot become pure will and dominate the robot, or try to divorce yourself from the robot. When Mavis arrives, it seems that she suggests that there is no real internal split, or in her words 'there's no governor anywhere'.

Hagbard's 'no enemy'/ 'no friend' cards are a way for him to mindfuck ppl into awakening. These cards represent an externalization of the teaching about dualism.

Here is a footnote that appears in one of my academic analysis of Discordianism that is forthcoming, hopefully: The phrase “there is no governor anywhere” encapsulates the epistemological anarchism at the heart of Discordianism. For a longer meditation on this phrase see Wilson, Top Hat Trick, pp.301-305. (I see Tom has linked to this section in his comments) It bears mention that the line does not appear in conventional translations of Chaung-Tzu. Although, it may be derived from the second book of the Inner Chapters though. See Zhuangzi: The Essential Writings with Selections from Traditional Commentaries. trans. Brook Ziporyn, (Cambridge: Hackett Publishing co., 2008), pp. 10-11.

I like to think that the authors purposefully followed the I vs Robot conversation with a discourse concerning different modes of private property so as to indicate that the two operate by the same principle. George is right to believe that in some sense (namely the statist sense) property is 'impossible' on the ontological level as ownership is merely a delusion based on an abstraction usually protected by the state. Mavis is attempting to shift systems or hermeneutic lenses but George seems slow on the take. George's statist thinking is akin to Reich's authoritarian personality; through it he will not be able to understand himself or appreciate Mavis' ideas. Mavis counter-poses George's statist/authoritarian understanding with a individualist anarchist/Stirnerist conception of self-owning. You must self-own to have your own 'private decisions'. It is kind of a thrill to see the authors successfully articulate a form of Reichean individualist anarchist taoism.

p. 406 " Mavis took Hagbard's chair and smiled at him affectionately..."
- Mavis takes over the role of George's teacher for the next little while.

"Christ God, George thought, did Hagbard send her in to take me to the next stage, whatever it is?"

Christ represents a position, not a person. Christ isn't Jesus' last name in Christian mythology. He would be more correctly termed Jesus the Christ, but religions aren't exactly known for internal logic. The position of Christ = Tiphareth, the 6th Sephira counting from the top. We read this in the chapter Netzach, the 7th Sephira so Tiphareth indicates the next stage from this current pov. Crowley states in "Postcards to Probationers" the aim of his work - to produce Christs.

p.407: "You've discovered that love is more than a word in poetry, and you want it right away. You just had two other things that used to be just words to you - sunyata and satori"

George had had a taste of real love, but discovers that experience was temporary as per fyreflye's above explanation of satori - an experience, but not full Awakening. Sunyata usually translates as voidness. In this context I see it as detachment from the Robot. The Robot disappears temporarily. Void the bot. According to the Indo-European Lexicon from the Linguistic Research Center at the University of Texas in Austin, sunyata derives from the Proto-Indo European root "keu" which means "to swell," or "to grow." Obviously, phoeneticly sunyata, starts with "sun."

p.408: "... poring over one of Tim's books when you were eight or nine" The Sun = the tarot card corresponding to the path of Resh which connects the 8th and 9th sephira. Leary, himself, often portrayed an archetypal solar character, even at his death when he theatrically had his head sawed off and displayed on a platter in a documentary; ostensibly for cryogenic reasons.

p. "But you can't stop the motor without learning something about marine engineering first. You don't know what switch to pull"
From the context of magick - you can't just stop the Robot and expect higher consciousness. Marine engineering seems a clue. George then gets tested by an onslaught of male energy which he manages to subdue. George also begins to not identify with the Robot -"I took a deep breath and waited to see what the Robot would do. "Two Slavic-looking seamen" remove the male threat in the form of Harry Coin after George wins the battle with him

p. 413: "I ignored her..." George defies a direct, impassioned instruction from his teacher of the moment when she apparently lies to him. Another test to see if he thinks for himself or blindly follows external authority.

p.413: "I'm not a German shepherd or a draftee" Dorn continues to identify with higher consciousness - he isn't a dog or a programmed killing machine.

More along these lines(unbalanced yang)in the next section with Tobias Knight; starting with "That's the problem. I can't remember..." - recalls Gurdjieff's primary instruction, "remember yourself" ie as not the Robot. Also, the path of "mem," one of the 3 Hebrew mother letters, correlates with the element Water and with the Hanged Man tarot trump.

The following section with Carmel describes someone trying to get somewhere higher without remembering - trying to cross the desert of the abyss without the benefit of marine engineering; without the balance of yin energy:
"She goes out, still blubbering, and I go over to the window and look out the desert to calm my head. My rose fever was starting to act up..." ; up until "Christ Jesus, I was hot as a chimney." Real basic - fire = hot, water = cool; fire = yang, water = yin.