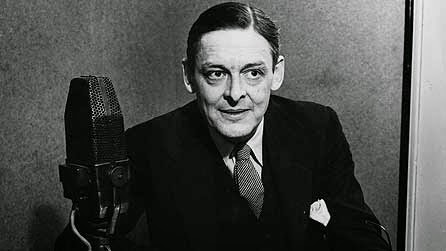 (This week: Page 398, "The Indians were a band of Shoshones," to page 406, "even though he was now convinced it was the system he himself had been growing toward for many years.")

"Humility is endless." I certainly felt plenty of humility when I read this section twice and realized I could not really think of much of anything to add to Hagbard Celine's lecture on the dangers of egotism when one believes one has found enlightenment. Help me out on this one, guys and gals! But I can at least help with a couple of the references.

Do not let me hear
Of the wisdom of old men, but rather of their folly,
Their fear of fear and frenzy, their fear of possession,
Of belonging to another, or to others, or to God.
The only wisdom we can hope to acquire

Is the wisdom of humility: humility is endless.

"He felt sorry for the woman who had written that: Pitiful modern version of the maddened Saint Simon on his pillar in the desert." (Page 403)

For once, my interest in Late Antiquity pays off; I recognize the reference to the very strange life of Saint Simeon Stylites (about 390 A.D. to 459 AD), who for many years lived on top of a pillar; good Christian pilgrims seeking his wisdom would have to climb up to talk with him. Notice that while many modern people would simply consider the saint a raving lunatic, in his day the saint was considered a very holy and a very enlightened person. Shit Head, Holy Man, indeed ("He wondered what the H.M. and S.H. stood for," pages 404-405.) 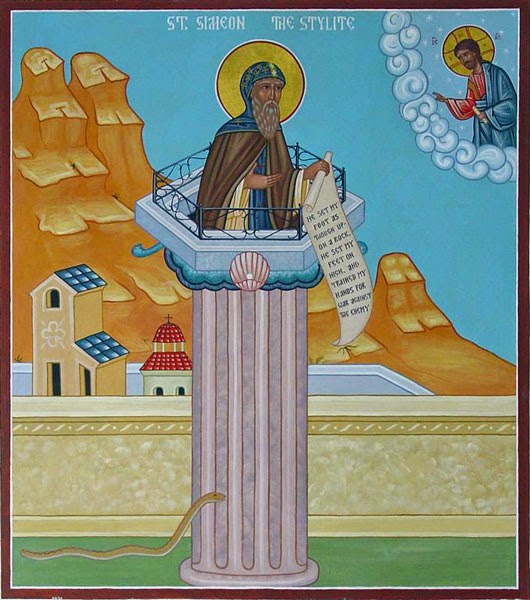 The same saint inspired Buñuel's movie Simon of the Desert, which is worth watching.

I have re-read the same copy of Illuminatus! each time I go through the trilogy, and it is illuminating seeing the way in which the marginal notations from each read-through, on one hand, seems to come from a different person, yet, on the other, exhibit a continuity. This was made especially clear to me in this week's reading as it was this section that mindfucked me into the Discordian reality tunnel on my first read through of the trilogy.

The frankness in which George and Hagbard interact mixes so well with the inscrutability that so often accompanies gnostic breakthroughs.
From my current reading, I understand this section thusly:
-'truth' is neurosomatic
-in order to understand truth, you must become a neuro-programmer
-being a programmer means understanding your robotic behavior.
This behavior is composed of allowing social context to dictate your behavior only to assume the coerced behavior is an expression of your true nature.
-deep down you do 'know yourself,' and, as a means to express your this knowledge, you are in a permanent state of rebellion, even if it is on the subconscious level(!). As it is said in Zen, you are already perfect, and therefore there is no dust to clean off the mirror?
-This is illustrated via an anecdote: American Indians base their social interactions on speaking from that place of knowing. Archeologists follows the dictates of what is expected of them and, to his peril, ignores what is obvious. He could have avoided the cesspool if he attempted to get his head out of his ass, so to speak.
-Against the ego, the subconscious demands to be heard. Its message is: blind obedience causes idiocy, violence, and bureaucracy.
-It is not listened to, so, SNAFU.

-(This harkens back to the story of p.d. ouspensky's awakening, which Wilson was so fond of telling.)

-Humanity, that is to say our potential (which may well not be confined to mere humanity), has yet to be manifest.
-Hagbard takes the gun out to catch George in a robotic reaction. He was inducing fear in him, the gun taking the place of the 'Dweller of the Threshold' in theosophical lit, aka Chapel Perilous.
-he overcomes the robotic reaction and is then confronted with an even more dangerous prospect~ supreme illumination.
-'Supreme illumination' is an ego trap, just like cowardice. I would venture to say that the attempt to achieve it is a form of cowardice, 'in some sense.' This is where the Illuminati have got the godmanship thing wrong. On another level, supreme illumination it is 'true,' and on another level is it meaningless, etc. (see: 'SRI SYADASTI')

-After the trial, George finds himself higher on the initiatory gyre, but still 'in the shit' as gurdjieff said.
-the mantra serves a practical defensive function against the ego-trips/cortex activity that will assail him as he moves up the gyre.
-the shaman must come off the roof; first the moutain was a mountain, then it wasn't, then it was; etc.

-Two errors: The mechanistic survival instincts/ 'the robot' cannot be denied expressions (this is Freud's thesis about civ.), nor can the divine spark be separated from it.
-Gnostic dualism is not the answer.


What do people make of the reconciliation of Robot and (mystical) consciousness? (p.404-406)


Side-note: in the intro to Prometheus Rising, Wilson points out that few of Crowley's readers actually practice the exercises he proscribes, and, as such, he finds them to be fools in their belief that Crowley has nothing to offer. Along those lines, a proper exegesis of the 'heavy metaphysics' covered in this reading may require a large dose of 'Hassan's own private formula' (p.394), or at least some hash.

Another side-note: I like to entertain the possibility that behind the seeming benevolent of this initiation (at least by comparison!), Hagbard is in fact no better than Hassan-i-Sabbah insofar as it is just another mode of brainwashing. It is the type of brainwashing where you give the mark a little info, and then allow them to do the hard work for you. (Isn't that mentioned in Illuminatus!? or is it Naked Lunch?)

It saddens me when people talk about the profound effect Prometheus Rising has had on them and then mention they've done none of the exercises.

I love The Four Quartets.

The use of the word "grok on page 399 reminds me of the extent of Heinlein's influence in the sixties and seventies.

Great photo of Eliot in front of a vintage RCA ribbon microphone. They are actually great sounding mics!

p.400 "Hagbard, more hawk-faced than ever, said carefully, "You are approaching Truth...."
- this recalls Horus the hawk-headed Egyptian god whom Thelemites believe rules this age. The next age or aeon gets ruled by the goddess Maat who signifies Truth. The sentence appears isomorphic with Crowley's succession of aeons.

Hagbard creates a crisis for George by pulling out the gun that triggers a vision for him.

p.403 " He remembered Saint Francis of Assisi called his body "Brother Ass," and Timothy Leary used to say, "The robot needs sleep." Both Frank and Tim compassionately acknowledge The Robot without identifying with it. This is in contrast to Hagbard's mantra to George "I Am The Robot." Hagbard deliberately lies to George. Earlier, p. 393, Hagbard admits that most of what he tells him is lies. "Truth is the opposite of lies... The opposite of most of what you've heard from me."

It appears classic guerilla ontology, Operation Mindfuck. In my opinion, he does this because he teaches more like Crowley and Gurdjieff than a conventional guru. In other words, Hagbard attempts to get George to think for himself, not mindlessly accept what he claims as Truth. Of course, when Hagbard tells George he lies to him most of the time, that itself could be a lie.

p. 402 - "And keep it in mind: you are the robot and you'll never be anything else" This appears another lie unless you consider the mind part of the robot in which case it appears true for the mind, the lie then being to "keep it in mind." Leary used say " in order to use your head you have to go out of your mind." "The Book of Lies" dives extensively into the subject of going out of your mind to reach higher consciousness.

p.402 "One who achieves supreme illumination is like an arrow flying straight to hell" This has a double meaning depending upon if the interpretation of hell draws from the conventional Judeo-Christian or if one applies a qabalistic interpretation of hell. RAW defines the qabalistic meaning of hell in his excellent introduction to "Visions in the Stone."

"I've read T.S. Eliot and now I understand him. "Humility is endless..." - this seems like a more accurate defence against the robot's reaction to the mountain top.

Hagbard seems spot on by advising caution. The story of the Shoshones and the archeologist (p.398-399) exemplifies the need for caution.

"The archeologist hefted his pick and shovel and went at it like John Henry trying to beat that steam drill" then he disappears into a cesspool. John Henry represents a macho character and has two male names - unbalanced yang. Trying to storm the citadels of higher consciousness by direct, forceful attack. Not too subtle. Elsewhere Hagbard cautions George against putting his hand into fire. The steam drill will win against John Henry because it symbolizes fire tempered with water. Even in the song John Henry dies and the steam drill wins.

Not being that literary I didn't know what Eric meant by "The Four Quartets" until googling "Eliot and Humility is endless" I've bookmarked it to read later, but doing a quick of the beginning and end it seems relevant to this part of Illuminatus! as well as appearing most excellent.

p.402 "So I've arrived. And it's just another starting place

The last stanza of "The Four Quartets:"

"We shall not cease from exploration
And the end of all our exploring
Will be to arrive where we started
And know the place for the first time.
Through the unknown, unremembered gate
When the last of earth left to discover
Is that which was the beginning;
At the source of the longest river
The voice of the hidden waterfall
And the children in the apple-tree
Not known, because not looked for
But heard, half-heard, in the stillness
Between two waves of the sea.
Quick now, here, now, always—
A condition of complete simplicity
(Costing not less than everything)
And all shall be well and
All manner of thing shall be well
When the tongues of flames are in-folded
Into the crowned knot of fire
And the fire and the rose are one."

Note the combination of fire and water symbolism.

My profound thanks to Tom and everyone who posts in this discussion for the stimulating, provoking, mirroring conversation.

typo: last comment should say "doing a quick skim of the beginning and ending"

The bit about spying in the heads takes on new relevance with the news from New Falcon.

Hagbard's lesson that the spirit cannot stay detached is at the center of the page count, and in some ways the heart of the book for me. The socially programmed robot is less strong in me than many because I have a natural tendency to oppositional defiant disorder and more tendency to question because my parents were liberal humanists, rather than Catholics (like the authors'). I was trying to escape the evolutionarily programmed animal that wants to fight, breed, and die. Keeping my distance via drugs was not sustainable (to the point where I now can't do drugs at all). The perversely positive message I got at this reading is that if I'd attained it correctly, with heroic Crowleyan doses of meditation and exercise, I still couldn't have kept it.

I really appreciate everyone who contributed in the comments this week.