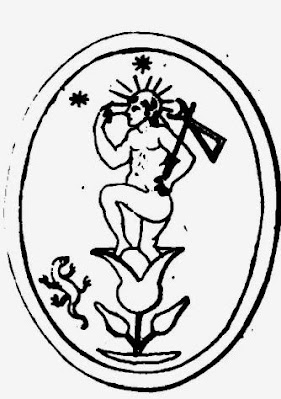 The “Babe in the Blue Egg” spoken of by Crowley is Harpocrates, the Silent God. To me this indicates the difference between the individual and the whole; after all, according to Crowley, the universe is one joke by the General at the expense of the Particular. Accessing the neurogenetic circuit triggers joy for the reasons given by RAW: the symphony of life swells and diminishes as a part of the whole. In his Confessions, Crowley writes about the absurdity of sorrow and compares the experience of life to Beethoven:

“My mind became still; the impact of impressions ceased to obsess me, I became free of the illusion of the reality of material things. All events became equally indifferent, exquisite phrases in an eternal symphony. (Imagine listening to Beethoven with the prepossession that C is a good note and F a bad one; yet this is exactly the stand point from which all uninitiates contemplate the universe. Obviously, they miss the music.)”

It would seem that the great boon of sixth-circuit consciousness is a transcendence past the individual and into the collective. Of course, we need that individuality, that ego to effectively engage with the world- those who devote themselves to the sixth circuit are the mystics who renounce ordinary life and spend their time in contemplation or infinite exploration. The sadhus who abandon home and property or the legendary fakirs standing for years about a pillar would be classical examples of a sixth-circuit devotee. For the rest of us, we must figure out how to comport ourselves with the ineffable knowledge of continuity and ecstatic reckoning with our part in said continuity while still finding a way to pay the bills.

That is why Harpocrates, Hoor-paar-kraat, is one half of Crowley’s idealized individual-god being, the other side being Ra-Hoor-Khuit, Horus. Harpocrates is the sense of the incommunicable, at least in the terms of everyday conveyance, that inhabits the “awakened” consciousness while Horus is the function of action that must figure out its individual will amongst the other notes of the symphony. Humanity is quite like a mushroom colony, the individual mushrooms sporting upon the earth are but parts of a greater mycelium network, concealed in the loam.

Honoring both Harpocrates and Horus, commingling and cultivating awareness of the two consciousnesses is the task of the magician, different from that of the mystic. The mystic is welcome to ride the arrow towards the realms of higher consciousness, eschewing worldly matters and dross for the bliss of realms beyond the material, but the magician is tasked with the role of integrating the supernal and the mundane. The magician is neither allowed to write off the messages of dreams, drugs or other states of consciousness and return to the daily world free of the woolly and baffling messages of the Neurogenetic circuit- they must incorporate them and transform their numinous impracticality to something useful, sometimes to aid the individual consciousness in its laboring ascent towards…what? Past the animal-headed gods and the lush maidens of our collective unconscious, beyond the elegant AGCT code of DNA, there is something…design? Purpose? Perhaps. More questions and answers, hunchbacks and soldiers in a seemingly infinite parade leading…where? My bet is towards the stars, whether that is literal or metaphorical is unknown to me.

If we manage to not destroy ourselves, I think we are headed for the stars.

Geoffrey Landis, a science fiction writer and NASA scientist who lives in the same city in Ohio as I do, autographed a book I bought from him with the phrase "Ad Astra."

The other half of Ad Astra usually is Per Aspera, or ‘through hardship’. That is also the title of an old Soviet sci-fi flick: https://www.imdb.com/title/tt0126237/

Apuleius, I am a great supporter of the mycelium as a metaphor, and love how the British Discordians/F23 people are using it. Your connecting it with the morphogenetic field seems very smart to me. It reminds me of this BJM song that goes “all around you/everywhere/it surrounds us/the love we share…” But maybe they were only singing about group sex, who knows.
https://www.youtube.com/watch?v=eTiTWmj6Kzo

I had another synchronicity. Last week I talked about watching Tusk after having Eric Wagner talk about elephants because of my mentioning Intolerance. This put me in the mood for giving a go to the documentary The Jodorowsky Constellation. In the last part of it, we witness Alejandro doing a psycho therapeutic exercise sometimes called a “structure”, where the patient uses other people or props as family members in order for some interpersonal dynamics to become more apparent. I had never heard of this before, and such practice does not feature in Jodorowsky’s recent Psychomagic, A Healing Art film. Two days later, I read an entire chapter devoted to this method in The Body Keeps the Score, a book suggested by Mike Gathers, which I am reading to enhance my understanding of the C5 mind-body workings.

I just completed one month of exercises with A Course In Miracles. If, as RAW said, it seems like gibberish sometimes, overall I have a feeling that it is about rewiring the mind through affirmations.
A recent lesson was “God is in everything I see”. This reminded me of Ibn’ Arabi Unity of Being. Apparently ‘God’ is equated with ‘Love’. It surrounds us...
The next lesson precised, "God is in everything I see, because God is in my mind.” Love is the law...

Beethoven seems the gold standard music metaphor for higher consciousness. Bob Dylan gives Ludwig Van a shout out on his most recent album at the end of I Contain Multitudes:

"I'll keep the path open, the path in my mind
I'll see to it that there's no love left behind
I'll play Beethoven's sonatas, and Chopin's preludes
I contain multitudes"

I enjoy listening to Beethoven when reading one of the two Horus invocations from Magick. Rock music doesn't work as well, I've tried.

Apuleius wrote: "It would seem that the great boon of sixth-circuit consciousness is a transcendence past the individual and into the collective." That agrees with my experience. The collective can get overwhelming, it calls for the art of balance; like an individual surfing a giant wave, keeping their board and body balanced upright upon a powerful watery force in motion.

Regarding retirements, Sufis talk about being in the world but not of it. Regarding having to pay bills, a well-known essay by Gurdjieff called The Material Question addresses that issue. I'll have to read it again. I sometimes grapple with financial anxiety.

I used to connect Harpocates with Harpo Marx because they both had so much to say, in their own way. I imagine it inspired Paul Simon to write The Sound of Silence. Silence seems a form of protection.

Spookah, thanks for the links, I'll look at them.

From the Holy Bible(King James version), The First Epistle of John 4:8 "He that loveth not knoweth not God; for God is love.

I would like to add to my previous comment that these psycho therapeutic ‘structures’ are sometimes also called ‘family constellation’. Hence the Jodorowsky Constellation of the title. Jill Purce also has interest in this method and does workshops about it. In a way, it is almost as if her work bridges between the biological aspect of the morphogenetic field researched by Rupert Sheldrake, and the psychiatric aspect studied by Stanislav Grof.

One thing related to the current events in Europe caught my attention. Most of the West was pretty quick to block access to Russian news outlets such as Russia Today, both on TV and online. A handful of journalists signed an open letter denouncing an attack on freedom of speech and journalism, but overall, governments seem to find it necessary to ban ‘propaganda’. Ironically, Putin has been both contesting this action and doing exactly the same by cutting access to the BBC, the recently renamed Meta, and generally restricting access to the internet.
The exercize of getting the news from two or more opposing viewpoints would now be near impossible in this case, including if one is living on the side that claims to fight for democracy. I do not feel very optimistic about the future of free thinking.

I also wonder if such dramatic and large scale events as a war could send ripples through the morphogenetic field and be a cause for synchronicities. RAW once suggested that geological events like volcanic eruptions tended to do just that. My own experience with a volcano last year seemed to confirm it.
Stan Grof talked many times of people in holotropic states having visions of concentration camps, even though they or their families had never experienced those directly.

Oz Fritz, maybe this John 4:16 quote could be an indication as to why Beethoven had sixteen quartets?

Spookah, I strongly suspect large scale events do impact the morphogenetic field or the collective unconscious and that those with their C6 fader even only slightly up in the mix, will feel it either consciously or unconsciously. The first day they attacked Kyiv my friend had nightmares about getting persecuted in a war zone. She didn't know about this attack until the morning, but knew the likelihood of it happening soon.

Bob Dylan has a song, Changing of the Guards that begins with 16 that seems to connect with the 16th Tarot trump, The Tower. The Tower corresponds with Peh, an indicator of war. I think it also connects with I John 4:16 with the line about the good shepherd:

Fortune calls
I stepped forth from the shadows to the marketplace
Merchants and thieves, hungry for power, my last deal gone down
She's smelling sweet like the meadows where she was born
On midsummer's eve, near the tower

It becomes more obvious that he sings about war as the verses progress. He places hope for a resolution in the Goddess archetype; the last verse begins: "Peace will come ..."

Randomly selecting from my Beethoven: The Complete Symphonies collection I discovered that ole Ludi wrote a ballet called Creatures of Prometheus. I enjoyed the overture, the only part of it in this collection, then ordered the complete piece. Reading about it, some critics consider it lightweight because of its commission for a popular audience. Nevertheless, this critic points out, it exists as a Beethoven composition, therefore worth giving a listen.

@Oz and Spookah- neat discussion! I certainly agree that events can "ripple" through our collective consciousness. History is a nightmare from which I am trying to awake and all that.

Oz, there is an early version of "The Fool" trump where Harpocrates was purposefully modelled after Harpo Marx. I believe I've posted it along with one of my posts at some point.

@Tom- Thank you for your shared hope.

Ad Astra Per Aspera, that is correct.