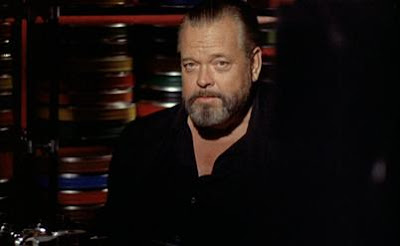 Orson Welles in "F For Fake."

"A previously lost Orson Welles film, Two Wise Old Men: Socrates and Noah, produced for the fledgling home video market has been uncovered," an article at Wellesnet says. "Wellesnet was afforded the opportunity to watch Two Wise Old Men: Socrates and Noah, which contains separate performances by Welles on the Greek philosopher and the biblical patriarch. The total running time is more than 18 minutes with eight minutes devoted to Socrates and the remainder to Noah. As expected, it is a fairly simple production that relies heavily on the power of Welles’ voice ... The Welles estate is hoping to make the short film available to a wide audience. The work is being carried out by David Reeder of Reeder Brand Management, which handles licensing for the estate."

The article is by Ray Kelly, owner of the website, apparently a leading source of Welles information.

Another headline at the site that might interest sumbunall of you: "‘F for Fake’ restoration to have North American premiere at MoMA."

F For Fake is my favorite Orson Welles movie.