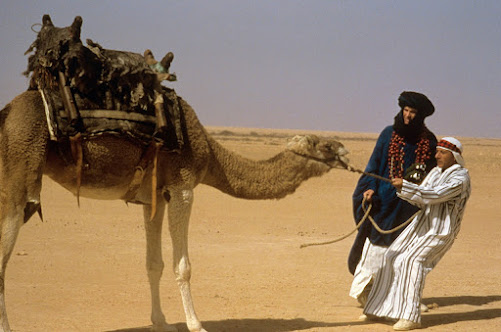 Scene from the movie Ishtar.

In a February 15 comment on Tom Jackson’s blog post about the sixth circuit chapter of Prometheus Rising, Spookah (BFHN) said...

Thank you Tom Jackson for opening the discussion on chapter 12, and for providing the links.

The first exercize sort of links back to the Heinlein quote, along with the picture, on page 107.

I’d say that we are maybe more used to comparing big city life with ant colonies, with the type of time-lapses found in Ron Fricke’s Koyaanisqatsi or Baraka now fairly common place.

Ex. 5: “see how long after reading this chapter you encounter an amazing coincidence”.

So I read this chapter 12 on Monday afternoon. Then the same evening, I watched the last episode of the docu mini-series Capitalism (2014), which featured excerpts from the films Intolerance (the Babylonian part) and Scarface (the 1932 Howard Hawkes version). It so happened that I had watched Intolerance the previous week, and Scarface the previous day.

Intolerance was a favorite of RAW, it gets a haiku in Email to the Universe, and he asked to watch it on the first week of the MLA 8 Circuits of Mind course.

As for Scarface, a few hours before going to see it I was reading a few pages from Eric Wagner’s Insider’s Guide to RAW, including the lexicon entry for 23, which ends with this: “after reading sombunall of this book, you will probably notice a few more 23’s than usual. Perhaps a lot more. Just a coincidence, I suspect.” I did spot a 23 during the film, as a street number right above the main character’s head.

Ex. 6: “What messages is your right brain trying to send to your left brain?”

So far I came up with three possibilities. The first is that Bob Wilson really seems up to something here, and that I should keep on studying PR and doing the exercizes.

Another is that Eric Wagner might already part of the Jungian collective unconscious, conspiring together with Ishtar and Al Capone in the mythical realm.

The last one is wondering if I should start to worry, because it’s usually not a good sign when you think the TV is talking to you.

Intolerance also has a scene in the modern section where someone finds a quarter. I wonder if that scene inspired the quarter finding exercises in Prometheus Rising. For a few years a mall in Hollywood had an elephant design motif inspired by Intolerance, but they removed the elephants because the film Griffith directed before Intolerance, Birth of a Nation, contained so much egregious racism. Thinking of elephants makes me think of Heinlein’s “The Man Who Traveled in Elephants.”

The coin flipping character George Raft played in the original Scarface became a cinematic archetype, showing up in the final dance sequence in Singin’ in the Rain and most interestingly in Some Like It Hot where an older George Raft responds to the trope.

I like the film Ishtar, and I enjoyed the condescending responses I got from people who had not seen the film but who “knew” how bad it “was” when I rented the video thirty odd years ago. I love how Neil Gaiman used Ishtar in Sandman.

People have different notions about the ordering of the sixth and seventh circuits. Leary usually saw the sixth circuit as the neuroelectric circuit and the seventh circuit as the neurogenetic circuit. Bob Wilson usually reversed these. Richard Rasa addresses this in the afterword to the Hilaritas edition of Prometheus Rising. I love Tim Leary’s comment, “This listing of possible future levels of human intelligence is necessarily tentative, suggestive, semantically fragile, and intellectually risky” (Flashbacks, pg. 386).

In Quantum Psychology Bob uses the Leary order, but he renames the neurogenetic circuit the morphogenetic circuit inspired by Rupert Sheldrake. Bob commented, “Where Leary and Grof, like Jung and Freud, assumed the non-ego information, not known to the brain, must come from the genes, Sheldrake, a biologist, knew that genes cannot carry such information. He therefore posited a non-local field, like those in quantum theory, which he named the morphogenetic field” (pg. 191).

In Schroedinger’s Cat Bob suggests that many people like to think of evolution as a Promethean struggle, but, really, one only needs to relax and cooperate with the DNA code. Following his observation in Quantum Psychology, I tend to think of this as cooperating with the morphogenetic fields. Promethean struggle makes me think of Beethoven’s music, and cooperating with the morphogenetic fields makes me think of Mozart’s. I had planned to spend most of 2022 listening to Beethoven cd’s when driving and then switch to Mozart as the year progresses, but a cd got stuck in the CD player yesterday. Perhaps I will switch to streaming Mozart piano concerti. One might see this as a synchronicity since the CD got stuck as I prepared to write this entry on this chapter which features Beethoven’s music so prominently.

Brilliant piece! I watched Ishtar for the first time last night, loved it and found it hilarious. I can see why many consider this a bad movie, it seems like a movie that parodies movies in quite surrealistic fashion. I got reminded of the old TV show Get Smart at times. A startling synchronicity regarding one of my recent comments occurred in the very last scene when they referenced getting a job in the lyrics of their closing song. The main character goes by the name Hawk. The girlfriend of the second main character has the name Willa.

I generally go along with Leary's ordering of the neurocircuits considering C6 as neuroelectric. However, RAW's presentation of it as neurogenetic in this chapter also makes sense. He still connects it with Gurdjieff's Higher Emotional and Crowley's HGA as do I. I have no problem with multiple maps, different ways of viewing, the same territory.

I got very influenced by Sheldrake's morphogenesis theories and deliberately tried to connect, through resonance, with the sound engineering morphogenetic field early in my career.

Thank you Eric Wagner for quoting me quoting you.

Film critic Jonathan Rosenbaum, whose opinion I value, said of Ishtar that it “was the most underappreciated commercial movie of 1987.” In the film, Ishtar only is a fictional place. But since the Isabelle Adjani character appears to be the only intelligent person in the entire movie (despite the presence of the CIA type of intelligence), one may wonder if she could be a veiled allusion to the great goddess, a modern day impersonation of this archetype. There’s this running joke that people at first always think she’s a man. Well, by default, many tend to think of “God”, the donut-shaped gaseous vertebrate, as being male. Director Elaine May is, of course, a woman.

Of The Man Who Traveled In Elephants, Wikipedia says that “the story can be viewed as an early manifestation of Heinlein's World as Myth, which featured prominently in his last novels.” I feel like the expression “world as myth” very much connects with the idea of the collective unconscious and its archetypes. And so in a kind of commodius vicus of recirculation, here as well we seem back where we began.

To celebrate elephants, I went on to watch Jodorowsky’s Tusk, another flick of ill-reputation. A couple of camels made an appearance, and a 23 popped up (‘23 rupees’).

Regarding the order between C6 and C7, having the neuro/morphogenetic circuit in 6 makes more sense to me if we try to connect it with C2, which deals with territoriality. Indeed, with a fully integrated C6, it could be argued that all borders have finally been abolished, not only the physical ones dealing with space, but also those of time, culture and language. The delimitation between personal and collective unconscious is gone, and even “mind and matter are not yet differentiated” (p.187)
On the other hand, all this looks in a way farther removed from the Self, so I can see why some would have this circuit placed after the metaprogrammer.
I have neither blind camel nor elephant in this race.

About direct connections between the corresponding chapters, I note that on p.53 RAW already talked about the Four Old Men from Finnegans Wake. And, although Edward Wilson is not named, p.58 has a paragraph on sociobiology.

As I've written earlier, I have been concentrating on Bach this year, as I don't know Bach's music as well as I know Beethoven's and Mozart's.

Still, as you note, Beethoven looms large in this chapter and the previous chapter. If I take time to listen to Beethoven again, should I concentrate on the later sonatas and string quartets, do you think?

I listened to Beethoven's 8th Symphony the other day.

Spookah, I suspect you got it right about the allusion to the Goddess in Ishtar. I would add that Isabelle's character (Shirra Assel) functions like Babalon, the earthly aspect of Her in Thelema. Babalon functions as a guide for Crossing the Abyss (going through the desert). Not a one to one correspondence though. For instance, Shirra gives them a suitcase that she believes has an important map, a map that will start an uprising, but doesn't know where to find the map in the suitcase. Shirra also provides the Abyss crossers with beads supposed to glow in the dark to drop along the way to find their way back only the beads end up not shining in the dark. The Emir tyrant (the ego clinging to existence) tries to kill off our heroes as they cross the desert to higher consciousness. Those the Emir fears will overthrow him = Shiites (She-ites). They sing about "truth" in a song that opens the film and sing about getting a special job at the very end.

More synchronicities: On Monday, the day after this blog posted with the Ishtar illustration, Erica Cornelius posted a few excerpts from my Ishtar Rising blog - the parts quoting and commenting on The Book of the Law - on her facebook page.
https://www.facebook.com/erica.peterson.1048/posts/2602480909895417
I mentioned the synchronicity to her and sent her the link here. Fairly sure Cornelius' timing related to current events.

Re-reading Deleuze's The Logic of Sense. In chapter 15, for some reason, he begins using the example of battles and war to illustrate his philosophical point. He brings up literary models of war by Stendhal, Hugo, and Tolstoy but maintains the best example for this = The Red Badge of Courage by Stephen Crane. Two days after reading this, I heard Stephen Colbert mention The Red Badge of Courage on his show in regard to his guest who wrote a book about Lincoln. I found a used copy of it yesterday for $8.68 after tax. This occurred a few days ago, thus synching with current events. Deleuze sometimes codes with Qabalah. 15 = the mystic number of Geburah, the sphere of War. He even mentions the god of War in the chapter.

I will answer soon.