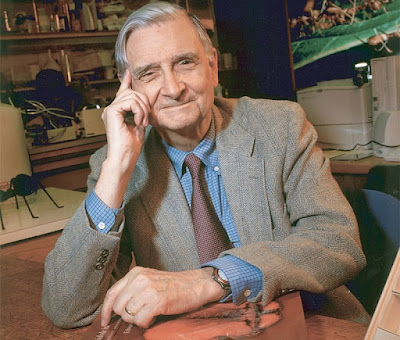 Well, Chapter 12 is kind of a mind expanding chapter, don't you think? Last night I watched the Super Bowl, which featured a team from Ohio (where I live) versus a team from California (where Eric Wagner lives.) I suspect Eric is happier with the outcome, but it was a good game. And then after the game I re-read Chapter 12, and I was impressed with it as one of the better chapters, from a reading standpoint, in Prometheus Rising. (As Eric has explained, one of the main points of this chronologically long reading group is to do the exercises, not just to read the book.)

Chapter 12 also is a rather topical chapter, too.  I say that because the famed biologist E.O. Wilson died on Dec. 26. The first exercise suggests reading Sociobiology by Edward Wilson, and while I haven't had time to do that yet, I would suggest taking advantage of the opportunity to read the New York Times obituary for E.O. Wilson. (As part of my digital subscription, I am allowed to share 10 links a month to get readers behind the Times' paywall.)

I suspect E.O. Wilson may have influenced one of my other favorite writers, Richard Powers, but if you read the Times article by Carl Zimmer (whatever you think of the Times' politics, there's still plenty of journalism talent there), it seems likely that some of E.O. Wilson's ideas influenced RAW:

“The organism is only DNA’s way of making more DNA,” Dr. Wilson brashly declared. He then explored a huge range of behaviors, showing how they might be the product of natural selection.

E.O. Wilson also is described in the obit as a "a self-described 'congenital synthesizer'," which sounds a lot like RAW, and there's quite a bit in the obit about Wilson's interest in ants; see the first exercise, and the references to insects at the beginning of The Universe Next Door.

Robert Anton Wilson was interested in many topics. His interest in science seems to particularly run to physics, as his interest in quantum mechanics makes clear, but as this chapter illustrates, he also paid serious attention to biology.

Addendum: The New York Times paid little attention to Robert Anton Wilson while he has alive, but did publish a nice obituary when he died; you can read it here.

Thank you Tom Jackson for opening the discussion on chapter 12, and for providing the links.

The first exercize sort of links back to the Heinlein quote, along with the picture, on page 107.
I’d say that we are maybe more used to comparing big city life with ant colonies, with the type of time-lapses found in Ron Fricke’s Koyaanisqatsi or Baraka now fairly common place.

Ex. 5: “see how long after reading this chapter you encounter an amazing coincidence”.
So I read this chapter 12 on Monday afternoon. Then the same evening, I watched the last episode of the docu mini-series Capitalism (2014), which featured excerpts from the films Intolerance (the Babylonian part) and Scarface (the 1932 Howard Hawkes version). It so happened that I had watched Intolerance the previous week, and Scarface the previous day.

Intolerance was a favorite of RAW, it gets a haiku in Email to the Universe, and he asked to watch it on the first week of the MLA 8 Circuits of Mind course.
As for Scarface, a few hours before going to see it I was reading a few pages from Eric Wagner’s Insider’s Guide to RAW, including the lexicon entry for 23, which ends with this: “after reading sombunall of this book, you will probably notice a few more 23’s than usual. Perhaps a lot more. Just a coincidence, I suspect.” I did spot a 23 during the film, as a street number right above the main character’s head.

Ex. 6: “What messages is your right brain trying to send to your left brain?”
So far I came up with three possibilities. The first is that Bob Wilson really seems up to something here, and that I should keep on studying PR and doing the exercizes.
Another is that Eric Wagner might already part of the Jungian collective unconscious, conspiring together with Ishtar and Al Capone in the mythical realm.
The last one is wondering if I should start to worry, because it’s usually not a good sign when you think the TV is talking to you.

I do think Chapter 12 expands the mind. Thank-you for the links to Dr. E.O. Wilson. Seems like he mostly invented the field of Sociobiology; my first time checking this out. The beginning of The Universe Next Door always made a strong impression. I hadn't connected that with Sociobiology until now.

I read this chapter a couple of days ago. No major synchronicities, yet. I did notice a shot of the main character in the Netflix series Inventing Anna standing in front of the 23rd Street Number 6 subway station in Manhattan; chapter 12 covers C6. Not necessarily recommended, this series seems more a guilty pleasure than anything esoterically significant. The trickster quality of the main character interests me, and the title appears suggestive from a Joycean viewpoint.

RAW connects C6, the neurogenetic feedback system, with the Knowledge and Conversation of the Holy Guardian Angel in the first couple of pages of this chapter. I agree.

Regarding exercize 6, "[w]hat is the right brain trying to tell us?" First, I wonder how well the right brain/left brain model holds up over time? Regardless of the mechanism, communication between C6, the collective DNA circuit and regular consciousness appears to occur. In my experience, we can receive much noise along with some signal with this type of psychic communication. Learning to discern the difference between signal and noise seems a task for the progressively developing Intuition. Some eccentrics and psychotics appear to lack this discernment and take the noise seriously.

My most recent notable example of psychic communication occurred 2 - 3 weeks ago during the practice of remote viewing. Without making any attempt to do so, I began flashing on scenes of horrible bloodshed and violence, EXTREMELY horrible, connected with Ukraine. This vision led to a belief that a Russian invasion would make it very bad for EVERYONE including Earth's eco-system. Since then, I remembered RAW's account in Cosmic Trigger of placing a protective cone of light over his son that seemed successful. In Starseed Signals RAW mentions workshops he gave where he would get the whole group to make a collective cone like this and how well that went. I wondered about the possibility of placing such a cone over a whole country?

To my reckoning, this vision could appear an alternate time track that doesn't actualize in this world, though, at this moment, it does seem like the Russians will invade. Or perhaps my vision simply represents an elaborate form of noise based on a subconscious interpretation of current events?