Why Nicolas Cage is right for the Illuminatus! TV series 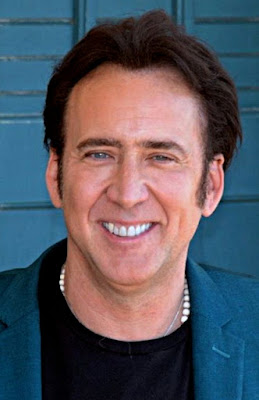 Nicolas Cage in 2013 (Creative Commons photo by Georges Biard)
I haven't seen any updates on the project to turn Illuminatus! into a TV series (if anyone has any news, please share) but when I read this amazing 2019 New York Times Magazine interview with Cage, I wondered if he would not be the ideal actor to play Hagbard Celine.  Here is my reasoning:
1. He wants to play the captain of an elaborate submarine. "When I read Jules Verne’s “Twenty Thousand Leagues Under the Sea,” the depiction of Nemo was that he was also in love with the ocean. He had freedom, and he lived in a palace that was also a submarine, playing the organ. To me, that was a beautiful life."
2. He's an Italian whose last name begins with a "C" (as most of you doubtless know, his birth name is "Coppola").
3. He went through a period where he meditated three times a day and read philosophical writers, such as William Blake. So to get him to take the role, the filmmakers could arrange for him to meet John Higgs.
4. He has visited Glastonbury, England, reputed site of King Arthur's grave, in his search for the Holy Grail. There is where John Higgs comes in again. Let's face it, there's only one well-regarded author who came to Glastonbury to scatter the ashes of Timothy Leary.  You want to learn the final secret of the Grail, Mr. Cage, you take this part.
5. Illuminatus! of course involves pyramids, and Cage has had a pyramid built in New Orleans to house his remains when he transitions from hardest working actor in show biz to Hollywood legend.
6. Illuminatus! is a mixture of modernist and pop culture influences, and that's also a pretty good description of Mr. Cage's art. In the article, the influences he cites include the German composer Karlheinz Stockhausen and a John Stamos TV commercial.
7. "In the last three years Cage has acted in 23 films." Actual sentence in one of the article's footnotes.
on August 10, 2020

He has my vote!

Sounds good to me!

But must admit I'm still hoping for Nick Offerman, and I believe so is he, "I know what I want more than anything: the Illuminatus! trilogy, by Robert Shea and Robert Anton Wilson. That would make for a delicious and freaky repast. If anybody gets that one greenlit, do please holler at me and I will deliver you the most commanding Hagbard Celine that I can muster."
http://www.rawillumination.net/2016/05/nick-offermans-dream-movie-role.html

Personally, I'd prefer Gary Oldman over Nicolas Cage any day.

Nic Cage also makes sense thru his association with Brian Taylor
Taylor has directed at least 2 Cage movies.
So they already have a working history together