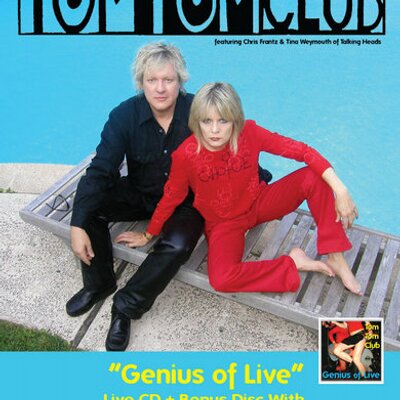 Chris Frantz and Tina Weymouth (Twitter account photo)
I have been reading Remain in Love, the new memoir by Talking Heads and Tom Tom Club founder/drummer Chris Frantz, and to my surprise I ran across an anecdote about Timothy Leary:
[About record company executive and producer Chris Blackwell, in Compass Point, Bermuda, as a party host]
One New  Year's Eve the guests were Dennis Hopper, Timothy Leary, Elia Kazan and his daughter, Sonia Braga, Robert and Sue Palmer, Wally and Genevieve Badarou, and many other happy revelers. After midnight, I took Sonia Braga and another woman by boat to the Junkanoo parade in downtown Nassau. I knew the waters very well by that time, but it was still a crazy thing to do on a windy, moonless night. I invited Hopper and Leary to join us, but they respectfully declined because they could see how  high on rum and cocaine I was. Can you imagine being too high for Timothy Leary? Well, that night I was. We made it back safely, but not until well after noon.
I should clarify that most of the time, Frantz seems to be a very sensible fellow, and his detailed book is a must read for Talking Heads fans. He does not stint on vignettes about famous people. Frantz and his wife, Tina Weymouth, have been married for 43 years, perhaps the world record for successful rock musicians.
on August 07, 2020

Can anyone inform as to what RAW’s contributions to Neuropolitique were? Specific chapters? An intro? Editorial?

Iain Spence said,
Hi there, most of the book was written by Timothy Leary while he was in prison (he names each prison where he's writing from).
RAW co-wrote several chapters with Timothy, I think 3 in total. If you can bring it up on Amazon you'll likely get a peak at the chapter titles.
RAW's contributions are on brain washing, as in we've all been brainwashed, the 8 circuit brain and hedonic culture in relation to socio-sexual trends.

Thanks for the anecdote. I can claim a similar (dubious) honor. Timothy Leary once told me I'd been doing a particular drug too long and had lost my judgement. He also once said that I was "an expert at manufacturing excuses."

As for Neuropolitique, perhaps it's worth noting that the original Peace Press (?) edition was just called Neuropolitics. In the intro to the later, slightly retitled Falcon Press edition, Timothy apologized for having been irritable and at times "a bit daft" during the time period that the book was written.