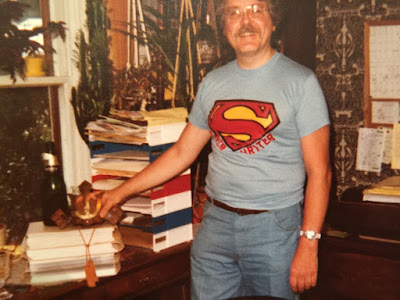 Robert Shea, wearing a T-shirt proclaiming him as "Super Writer," poses with the manuscript of Shike. Photo taken circa 1981, from BobShea.net.

I've long said that as great as Robert Anton Wilson was, his Illuminatus! co-author, Robert  J. Shea, also should be remembered, and still should be read. The "Robert Shea Week" I announced plans for a few weeks ago begins today, with about a week's worth of posts about Shea.

Shea, of course, besides coming up with the idea for Illuminatus!, getting Dell to buy it and and co-writing it with Robert Anton Wilson, also authored quite a few books on his own, mostly well-received historical novels such as Shike and Shaman and All Things Are Lights. He was working on two more novels when cancer claimed  him on March 10, 1994. He was only 61.

Many of my previous postings concerning Shea's work are available under "Robert Shea Resources" and "Illuminatus Resources" on the right side of his page, and I'll also put up links for Robert Shea Week. You can also visit the official page maintained by his son Mike Shea, read the substantial and useful Wikipedia entry.  and read the entry about Shea, by critic John Clute, at the Science Fiction Encyclopedia.

"Robert Shea Week" should not be taken too literally, but is a flexible event, as "Robert Anton Wilson Week" was at Boing Boing years ago. I am expecting the publication soon of the new Starseed Signals "lost" RAW book and Prop Anon has been hoping to make an announcement about his Robert Anton Wilson biography, and who knows what other news might emerge. If there is "breaking news," you will get it here without delay, and then Robert Shea Week will resume.

Thanks to everyone who has helped me put my Robert Shea Week posts together. I got one response when I offered to publish guest posts, and that will be up soon,  and I also got help from others for requests for favors or information; it's not too late to send me something or just to post a comment on one of the blog articles.

Bob Shea was a dear friend. This is what I wrote about him when he died:

Shea's historical fiction can be described as "traditional." Each novel told a story, with beginning, middle, and end, pretty much in that order, and pretty much without obliqueness, irony, ambiguity, metafictional self-reference, and other such postmodern qualities.

The books can likewise be described as traditional in morality. Though they do not reflect the punitive sexual code often indicated by that phrase, they unabashedly treat such traits as compassion, courage, and loyalty as Good Things.

There are those who condescend to this sort of novel. (That is particularly easy to do so if one has not written one.) In reply, one might, at the very least, point out that each apparently simple and straightforward story is also a skilled and complex weaving of many plot threads, told in graceful prose with style and wit, and peopled with richly detailed and fascinating characters.

As a person, Shea was much like his novels. First and foremost, he believed that people should be nice to each other, but behind this apparently simple approach was an intelligent awareness of the problems it entailed and a perceptive skepticism about the organizations and ideologies that purported to provide and institutionalize niceness.

I had the pleasure of knowing Bob Shea, first postally and then in person as well, for 15 years. When Bernadette Bosky and I had our nonlegal wedding ceremony, he officiated, with the style, humor, and warmth he brought to everything. He was a flawed human being like all of us, but his good qualities far outweighed any flaws. I will miss him.