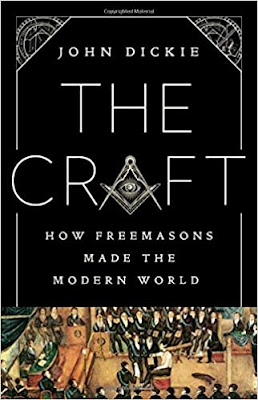 Tyler Cowen has not, in fact, begun reviewing books for RAWIllumination.net readers, but you might almost think so from his latest "What I've Been Reading" blog post. By my count, three of the five books are of pretty clear interest to people who follow this blog.

Tyler reviews The Craft: How the Freemasons Made the Modern World by John Dickie. "Although it has a stereotypically bad subtitle, this is an excellent book.  It clarifies exactly where the Freemasons came from (dissident thought connected to James II), its connection to actual masons, how the movement got routed through Scotland, its prominence to the Enlightenment, its African-American component (Martin Delany), how it influenced Joseph Smith and Mormonism, why Castro tolerated it and the Shah of Iran encouraged it, and much more," Tyler reports. The book is out August 18. I used Amazon to check the index, and there are quite a few references to the Illuminati.

There's also a mention of  The Decline of Magic: Britain in the Enlightenment by Michael Hunter. Tyler picks out a key quote: “Though it is often thought that the scientists of the early Royal Society tested magic and found it wanting, this is a misconception.  In fact, the society avoided the issue because its members’ views on the subject were so divided, and it was only in retrospect that this silence was interpreted as judgmental.”

Classical School: The Birth of Economics in 20 Enlightened Lives by Callum Williams covers a number of folks Robert Anton Wilson mentions in his writings, such as David Hume, Adam Smith, John Stuart Mill and Condorcet. Tyler, himself an economist, says the book is "A clear, well-written, and useful introduction to the lives and thought of some of the leading classical economists."