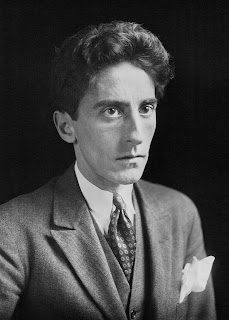 Jean Cocteau in 1923
The blogger at RAW Semantics spots something interesting -- the fact that Robert Anton Wilson cited Jean Cocteau as playing a "major role" inspiring Cosmic Trigger III -- and attempts to figure out why Cocteau was important to RAW.
Years ago, after I discovered surrealism but before I really got into David Lynch, I saw Cocteau's movie Orpheus.  So I was interested on one of the points RAW Semantics uncovered: "... in a BBC2 documentary on Surrealism presented by David Lynch (‘Surrealist Cinema’, BBC Arena, 1987 – part 1/part 2). Lynch says: 'in my opinion, Cocteau is the heavyweight of Surrealism'."
I reach a search for "Jean Cocteau" in An Insider's Guide to Robert Anton Wilson (I bought the ebook so I could do such searches) and found one reference; Eric says there is an entry for Cocteau in Everything Is Under Control, one of the few RAW books I don't have.
Addendum: The links RAW Semantics provides to the BBC show are very interesting. The quality of the video is not very good, but many of the films Lynch mentions apparently are available on the Internet, e.g. Man With a Movie Camera by Dziga Vertov.
on August 01, 2020

Some think Cocteau served as Grandmaster of the Priory if Sion.

The reference to Cocteau in Everything is under Control is on p. 114 and refers both to Cocteau's position in Surrealism and to Cocteau's allegedly being the 23rd (!!) Grand master of the Priory of Sion, with a sly reference to F for Fake.

The follow up film to Orpheus, called Testament of Orpheus is pretty fantastic. Cocteau stars in this one, as he is put on trial by some sort of cosmic hierarchy for revealing too much in his previous film.

The one to quietly dig into, imo, is La Belle et la Bete (Beauty and the Beast). I'm convinced everything is buried in there (the dog buried deeper as it were).