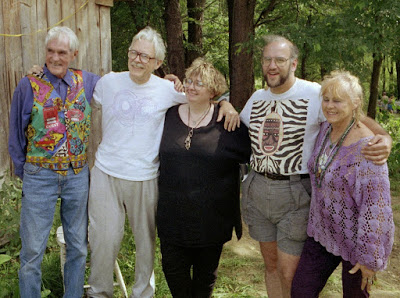 [Supergee posted this comment when I began "Robert Shea Week," and with his permission, I am now reposting it as a blog entry. -- The Management.]

Bob Shea was a dear friend. This is what I wrote about him when he died:

Shea's historical fiction can be described as "traditional." Each novel told a story, with beginning, middle, and end, pretty much in that order, and pretty much without obliqueness, irony, ambiguity, metafictional self-reference, and other such postmodern qualities.

The books can likewise be described as traditional in morality. Though they do not reflect the punitive sexual code often indicated by that phrase, they unabashedly treat such traits as compassion, courage, and loyalty as Good Things.

There are those who condescend to this sort of novel. (That is particularly easy to do so if one has not written one.) In reply, one might, at the very least, point out that each apparently simple and straightforward story is also a skilled and complex weaving of many plot threads, told in graceful prose with style and wit, and peopled with richly detailed and fascinating characters.

As a person, Shea was much like his novels. First and foremost, he believed that people should be nice to each other, but behind this apparently simple approach was an intelligent awareness of the problems it entailed and a perceptive skepticism about the organizations and ideologies that purported to provide and institutionalize niceness.

I had the pleasure of knowing Bob Shea, first postally and then in person as well, for 15 years. When Bernadette Bosky and I had our nonlegal wedding ceremony, he officiated, with the style, humor, and warmth he brought to everything. He was a flawed human being like all of us, but his good qualities far outweighed any flaws. I will miss him.

Supergee writes a blog. As Arthur Hlavaty, he is a well-known science fiction fan who was nominated 12 times for the Hugo Award for Best Fan Writer. Some of his fanzines are archived on the Internet. See also this archive.