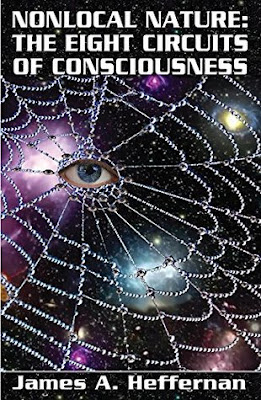 Earlier this year, I read James Heffernan's book on the Eight Circuit model, Nonlocal Nature: The Eight Circuits of Consciousness. I can't seem to find the time to do a long book review, but here are some notes:
1. I gave it four stars in Goodreads. I thought it was interesting and well written. There as nice sentences such as, "If you can walk away from this book feeling that the light reflecting from the page and hitting your eye is not ordinary, then I am happy."
2. Rather than aimed at the general reader, the book seems aimed mainly at people who have learned about the Eight Circuit model from Robert Anton Wilson and who want to learn more or get an additional take on it. There isn't much of an explanation of where the model came from and the history of discussion about it. Heffernan kind of assumes people know what it is and will welcome discussion. Perhaps a new edition could include an introduction to the concept and reach out to people who are not already familiar with it.
3. I am never quite sure how seriously to take the Eight Circuit model, and this book does not move the needle very much for me one way or the other. I don't know what to make of sentences like, "As I have noted previously, having seventh circuit awareness is like having access to the uncollapsed quantum wavefunction of the brain."
4. Heffernan seems to mostly stick pretty closely to RAW's ideas, so it's noteworthy when he differs from RAW. He isn't big on space migration and writes (other passages could be cited) "Space migration is at best a distant goal, and it appears that, with technology as it is, especially pertaining to propulsion technologies, it could be many, many decades before serious space migration is remotely possible." Obviously the space migration dreams of RAW were premature, but I'm still more of an optimist than Heffernan.
5. The paperback is $30 but the Kindle is only $4, so it's affordable to get an ebook and draw your own conclusions. Amazon also allows Kindle owners to loan their copy to other readers who use a Kindle.
on August 15, 2020

It’s been quite a while since I read this book so I’m working from memory and from a quick review of notes that I wrote in the margins, but overall my impression was not as favorable as yours. I thought he did a decent job discussing circuits 1-4, and my recollection is that in a couple of instances he provided some interesting perspectives that I hadn’t considered before. It’s when he moved on to the upper circuits particularly 6-8 that I began to have issues. In fairness let me say that these circuits are the hardest to discuss because most of us have only experienced them for brief moments if at all. I sometimes find RAW’s discussion of those circuits to be confusing, but it seemed to me that Heffernan didn’t really understand these circuits and cloaked his lack of understanding in passages like the one you quoted. But I had a couple of other issues.

1. He has a tendency to frame speculation and supposition as fact. I wish he had studied RAW’s writings on E-prime a little more closely.
2. He seems to have a tendency to romanticize concepts like Gaia and noosphere. In particular his perception of Gaia seems very “new-agey” to me and I think that Lovelock would shudder at the way he personifies It.

All in all there were parts of the book that I liked, but I thought he got lost in the latter half. R