Dillinger's body to be exhumed 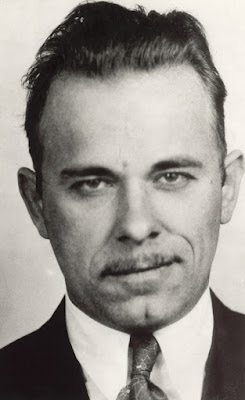 From the Associated Press:

"INDIANAPOLIS — The body of notorious 1930s gangster John Dillinger is expected to be exhumed in September from a concrete-encased grave at an Indianapolis cemetery more than 85 years after he was killed by FBI agents outside a Chicago theater.

"The upcoming exhumation could put to rest conspiracy theories suggesting that the violent criminal some people considered a folk hero during the height of the Great Depression isn't even buried in his marked grave."

And a different report from The Guardian:

"The Indiana state department of health released affidavits signed by Mike Thompson and Carol Thompson Griffith, who say Dillinger was their uncle. In the documents, they say they are seeking to have “a body purported to be John H Dillinger” exhumed from Crown Hill cemetery for a forensic analysis and possible DNA testing.

"Both say in the affidavits supporting an exhumation and reburial permit the state agency approved in July that they have received 'evidence that demonstrates that the individual who was shot and killed at the Biograph Theater in Chicago on July 22, 1934 may not in fact have been my uncle, John H Dillinger'."

Hat tips: Supergee, @advantardeodus and others. Supergee cites the Daily Mail, "the UK's favorite unreliable narrator," but the AP and the Guardian are pretty mainstream news sources.