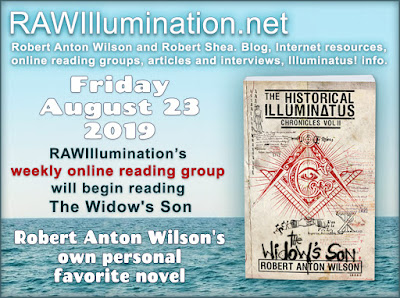 The online reading group for The Widow's Son begins Friday. Here are eight reasons to join us!

2. Our Virgil, serving as our guide as we journey through the book, will be Gregory Arnott, who knows a lot about RAW, magick, literature, history and many other topics.

3. One of the reasons we are having the online reading group (and one reason we did The Earth Will Shake) was to encourage people to purchase the official text of the titles, the new Hilaritas Press editions put out by the Robert Anton Wilson Trust. When you purchase one of those books, the royalties go to Robert Anton Wilson's children. * (I have an old paperback of The Widow's Son but recently bought the Hilaritas ebook -- useful for searching the text).

4. Purchases of The Widow's Son also support Hilaritas Press and contribute to keeping RAW's work in print and available for new readers.  And in fact, our reading group has the imprimatur of Hilaritas Press -- see the above meme, which Rasa created for the new Hilaritas Press newsletter!

5. Although The Widow's Son is part of a trilogy, in my opinion it works also as a stand-alone. You don't have to have already read The Earth Will Shake, although it's likely a RAW fan will want to read all three works in the  Historical Illuminatus series. RAW used to claim that all three Schroedinger's Cat books could be read in any order, and I lean toward the idea this applies to Historical Illuminatus!.

6. Discussing this book will call attention to the excellent new drawings RAW fandom MVP Bobby Campbell did for the new editions. (For more on that, see this and also this.)

7. The Widow's Son draws on the book Holy Blood, Holy Grail by Baigent, Leigh and Lincoln. Many of you probably have read the mega best seller that also drew on the book, The Da Vinci Code by Dan Brown. So if you read both, you can contrast the two. (Also, see this blog post).

8. The Widow's Son also is a favorite book of many RAW fans. See, for example, this blog post, quoting Michael Johnson when I asked about his favorite RAW books: "The Widow's Son seems uber-RAW to me because he's working all (mostbunall?) of his favorite late 20th c. ideas into a novel set in the late 18th century. At the same time he's also doing his "historical novel" with a bit of Bildungsroman added in, PLUS he's got that whole other footnote-world counter-narrative, which captures the mad acidhead postmodernist-cum-surrealist Erisian Wilson. I love that book. He did too. He said when he wrote it — circa 1985 — he was "really hot." He wrote that one in Ireland."

* We recognize not everyone can afford to run out and buy a new book. Please check out a library book (don't overlook interlibrary loan) or get your hands on a cheap used book and join us, anyway.
on August 17, 2019