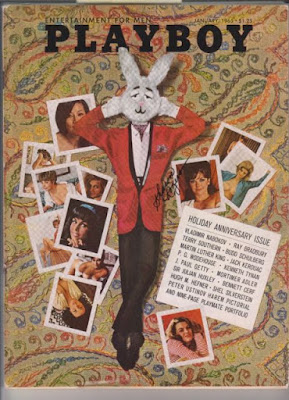 On Twitter, @advantardeodus has called my attention to the fact that a Playboy magazine archive is now available, remarking, "All issues of Playboy ever on their website from $8/month and I guess you could mine info from them within one month... ??"

Indeed for a reasonable cost, researchers can research a magazine where Robert Anton Wilson and Robert Shea once worked, and sometimes planted items that found their way into Illuminatus!

The page which offers the digital archive has chosen an issue which shows off the magazine in its heyday: January 1965, a "special holiday issue," with writers listed on the cover who include Vladimir Nabokov, Terry Southern, Ray Bradbury, P.G. Wodehouse and Jack Kerouac. Whatever you think of the magazine, at its height it was quite a cultural force.
on August 13, 2019