Rasa on RAW and Olga 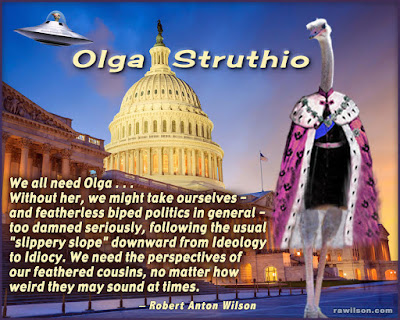 By Rasa
[Reprinted by permission from a Facebook posting -- The Management]

I first heard about Olga in September of 2003 when Robert Anton Wilson sent an email to his private email group (affectionately called the GroupMind). He was sending a reply in a discussion about how Al Franken had said, "God supports my politics." Bob, ignoring the satirical parody nature of Franken's anti-Bush remark. wrote:

Franken claims God supports his politics; so do such differing theo-politicians as Osama bin Laden, Jerry Falwell, Rush Limbaugh etc. who all claim God supports their politics. Aside from such self-serving claims, Diderot observed empirically that God always gives victory to the side with the biggest cannons. Napoleon, on hearing this, replied that in his experience God supports the best Intelligence service.

Any other empirical data on God's politics, anyone?


Bob had taken to sometimes signing his emails, "Damned Old Crank." Some friends started referring to him as "DOC."

"Surely Franken was being sarcastic" a friend insisted. Bob wrote back:

But how can one judge such claims? I don't know who we shd consider Divinely inspired, who merely delusional/schizo, who running a con on the gullible, who making a joke, etc. That's why I want empirical data on who the Ancient Jester really supports……


"Ancient Jester" – I loved that. Various people offered their ideas on what they thought might be God's politics, and then Bob sent this reply:

If I announce [as I've considered] that God supports the Guns and Dope Party, how many of you will consider that

How do you rank the similar claims of Monkey-Boy, Jerry Falwell, Son of Sam, the Tsars of Russia, the Tsars of USA, Osama bin Laden, the popes of Rome etc?

Anyway God has personally endorsed the GUNS AND DOPE PARTY and cursed Tsardom. He told me so, speaking through an ostrich named Olga who co-starred with Orson Welles in a thriller called SOUTHERN STAR. Those other guys are just jealous because the Voices don't speak to them and they have to fake it!


Bob had different names for President Bush. One of them was "Monkey Boy." About a month later, Bob announced in a GroupMind email that he was running for Governor of California as the Guns and Dope Party candidate. Soon after that Bob started describing some of his interactions with Olga. At one point he wrote:

Olga wants me to run for president next year, and I can't refuse. She's one persuasive bird, bi god.... Did you ever try arguing with a Trans-Human critter two feet taller than you, with a sharp beak yet????


A few days later I was working with Bob's webmaster, Patrick Farley, and I had set up an online gift shop for the Guns and Dope Party. In emailing Bob and Patrick I gave them the shop's link and wrote,

"By leave of her majesty Tsaritsa Olga," Bob was unfamiliar with the obscure spelling of Tsarina that I had found and wrote the following:

I believe correct Rooshian is Tsarina, but Olga has a fey sense of humor and prefers Tsardine. Signori, YOU go and argue with her.

Bob was a prolific emailer, sending out something interesting at least once a day. It was amusing during that period to check my mail and start seeing regular emails from Olga666! Check out Bob's thoughts on Olga from the Party's website.