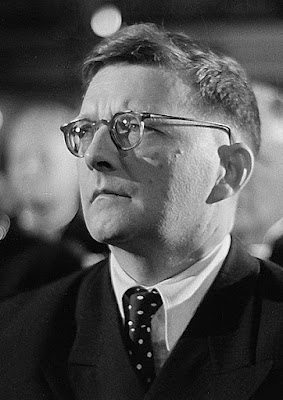 Do the rest of you have listening projects? One of my favorite Robert Anton Wilson stories, via Eric Wagner, is about the time RAW sat up all night, tripping on LSD and listening to all of Beethoven's nine symphonies, one after the other. I'd like to replicate that someday, although I'd do it earlier in the day and likely use iced coffee as my main "substance." I wonder which performances were RAW's favorite?

My current listening project is to download and listen to all of Shostakovich's 15 symphonies; I started out with 1-4 last week. (I'm listening to the "Shostakovich and Kondrashin: Complete Symphonies" set with the Moscow Philharmonic Orchestra, available on Freegal, the public library music service.)

It's interesting to compare my own experience with received opinion. I thought the first symphony, written when Shostakovich was still a teen, to be not one of his best, but still pretty good. That seems to be the consensus. Nobody has anything good to say about symphonies 2 and 3 (including the composer); both are patriotic symphonies that conclude with a chorus. On a first pass, I thought the second, "To October," was enjoyably weird, but the third, "1st of May," didn't do much for me.

The fourth, banned for years because it was too "out there" to risk being played when Stalin was alive, is really great, one of my favorite Shostakovich works, and Kondrashin and his players do a fine job with it. I like it much better than the more-famous fifth, which seems a bit pompous to me. The fourth has undergone a big revival in recent  years; there are many different recordings of it to choose from.

The conventional opinion is that Shostakovich's 15 string quartets are more consistent in quality; his symphonies are considered uneven. I concentrated my listening at first on the string quartets, but I realized the other day I still hadn't heard many of the symphonies. It's time to check them out.

I hope this project went well. Rafi Zabor just posted on Facebook about the possibility of Prokofiev's death influencing Shostakovich's Tenth Symphony. I have listened to a bunch of Shostakovich over the past few days.