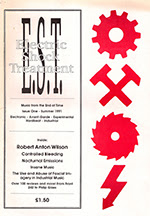 Martin Wagner does it again, with a posting of an interview of Robert Anton Wilson that appeared in 1991.  The interview is by James Wallis.

I particularly liked this bit about authorial intent:

So if your writings do have an intention, what is it? Obviously with books like Quantum Psychology, their intention is quite clear but is there a subtext? Do you want to alter the mind of the late twentieth century?

Robert Anton Wilson: And the twenty-first, yeah. At my most ambitious I want to make as big a revolution as Voltaire or Marx or Nietzsche, only I hope mine will be totally wholesome. Of course, that’s hoping for a lot. On a more modest level, I just hope I give some people some good laughs, cheer them up and make them a little more optimistic because the world is suffering from terrible depression. It’s a global illness.
on January 12, 2019