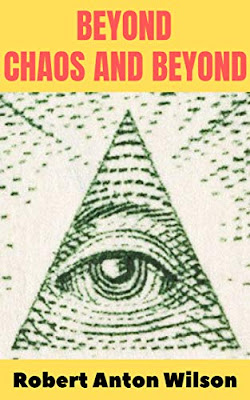 From the publisher's blurb:

For over a decade (1987-1997), Robert Anton Wilson, co-author of the Illuminatus! trilogy and author of The Cosmic Trigger, published a quarterly newsletter, Trajectories: The Journal of Futurism and Heresy, full of original articles, unpublished fiction and outrageous opinion. The 1994 book Chaos and Beyond collected the best essays from the first ten issues of the newsletter; this sequel, Beyond Chaos and Beyond, preserves the best of the final issues, including an excerpt from RAW’s unfinished sequel to Illuminatus!, transcripts of audio and video issues, and transcripts of the several videos featuring RAW produced specifically for his globe-girdling fan base.

Additional material includes a rare 1977 interview with RAW; a major essay on Philip K. Dick, as well as RAW’s comments from a PKD documentary; transcripts of RAW’s 1978 PBS appearances discussing The Prisoner; and a 30,000-word essay by the editor detailing his 30-plus-year association with Wilson.

Beyond Chaos and Beyond is essential reading for hardcore fans of Robert Anton Wilson’s extraordinary work and life.

Any plans for a print-on-demand edition?

(Posting this question here in case Scott Apel is reading.)

@Jesse, I will find out about plans for a print edition.

This is awesome! I love those Prisoner clips. Print would be great, and I’ve been wondering what to kindle next now that I finally yes finally finished Ulysses yes!

What a bargain! That includes some real treasures.

As Bob often said to me, "Praise be the Sun Absolute!" - great news, this anthology.

Just finished reading the first part of the new volume. It is great and filled with awesome amounts of information. Apel did a great service with this material. And, for the record, I really enjoy reading RAW's take on Jim Mosley and the Gulf Breeze "sightings" and such despite how dated they may be.

Tom-Tell Scott I'm buying a printed version of this book as soon as it (might?) come out.

@Michael, as soon as I have news about a possible print edition, I will share.

"D. Scott Apel: Beyond Chaos and Beyond pretty much covers the unpublished RAW material that I have -- at least the best of that material, and the most relevant."