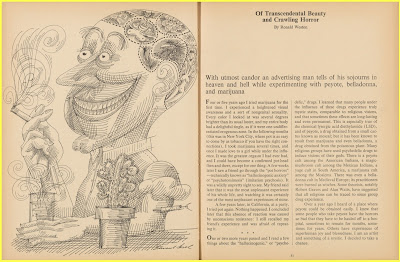 A posting at the Boing Boing website by RAW fan Mark Frauenfelder reports that there is an online archive of 22 issues of fact magazine, where Robert Anton Wilson served as editor and where some of his articles ran.

Mark illustrated his piece with a picture (pictured) of the Ronald Weston article,  "Of Transcendental Beauty and Crawling Horror," which as RAWIllumination.net readers and Martin Wagner fans know, was written by Wilson.  Mark did not know that, however, until Michael Johnson pointed it out to him in the comments.