Oz Fritz on Steve Pratt's 'Tale of the Tribe' book 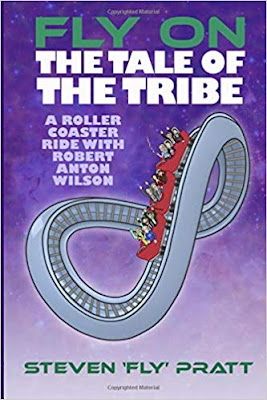 At his blog, The Oz Mix, Oz Fritz has posted an entry on the new edition of Steve Pratt's book,
Fly On The Tale Of The Tribe: A Rollercoaster Ride With Robert Anton Wilson. The book is available on Amazon and to Pratt's Patreon supporters.

Oz is an alum of Robert Anton Wilson's "Tale of the Tribe" online course and he strongly recommends Pratt's book:

This book is also one of the rare (so far), and invaluable primer books for the writings, philosophies and methods of Robert Anton Wilson.  For that alone, I highly recommend it, but there is much else too.  We get a cast of philosophical and scientific heavyweights and a synopsis of some their prime ideas and practical contributions to human development - the Tale of the Tribe.  Among others, we hear from Nietzsche, Alan Moore, Claude Shannon, Giordano Bruno, Giambattista Vico, Buckminster Fuller, Wilhelm Reich, Korzybski, John Lilly, Tim Leary, Ernest Fenellosa, Jung, Yeats, Aleister Crowley, Marshall McLuhan, Orson Welles, Paul Krassner, John Sinclair, and of course, the Tale of the Tribe's first two stars, James Joyce and Ezra Pound.

Sombunall of the subjects include:

What is the Tale of the Tribe? and its corollary, what do we do with it?
Augmented Reality(AR)
What is art? We are all artists.
Eprime and certainty; the effects of language on consciousness.
King Kong, his sister Hong, and Guerilla Ontology.
Finnegans Wake
James Joyce/RAW inspired geo-mapping APPS - I suspect this one brilliant idea alone would revolutionize the consciousness of whomever used them.
Hologrammic writing.
The contribution of Chinese ideograms to the Tribe.
Magick.
Holometic Retribalism,  a Fly neologism which seems a portmanteau of hologram and hermetic.
The influence of psychedelic drugs on the Tribe.
Quantum entanglement and spooky action at a distance.

FOTTOTT is full of amazing quotes, the large percentage from Wilson, but many from other conspirators that serve to fill out and substantiate this vision of the Tribe.  Perhaps my favorite parts are the email and interview transcripts between Fly and RAW and any personal exchanges they had as it presents new light on the venerable sage.